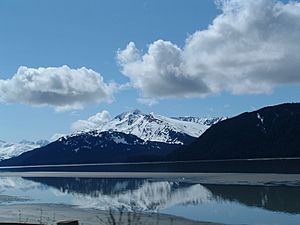 Turnagain Arm is a waterway into the northwestern part of the Gulf of Alaska. It is one of two narrow branches at the north end of Cook Inlet, the other being Knik Arm. Turnagain is subject to climate extremes and large tide ranges. 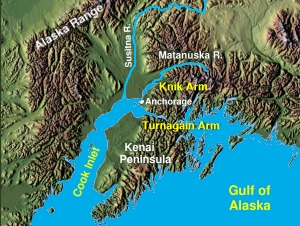 Turnagain extends in an east-west direction, and is between 40–45 miles (64–72 km) long. It forms part of the northern boundary of Kenai Peninsula, and reaches on the east to within 12 miles (19 km) of Portage Bay, a western branch of Prince William Sound. Turnagain is characterized by remarkably large tides of up to 40 feet (12 meters) which are the largest tides in the United States. The flood tide often begins with a tidal bore especially on large tides with a strong east wind, which has a height of 6 feet (1.8 m) at times, and runs in from the west at a speed of 5–6 miles (8.0–9.7 km) an hour. At low tide, the arm becomes a broad mud flat, cut by the stream channels. Historically small steamers entered and left on high water though the practice is rare at best since most if not all the places that they went are now connected by road. 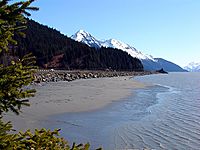 The region adjacent to Turnagain Arm is very rugged. South Suicide Peak is the tallest mountain rising from the north side of Turnagain, and Mount Alpenglow the highest on the south side. Mountains rise precipitously on both sides of the arm and reach altitudes of 5,000–6,000 feet (1,500–1,800 m). Their tops are ragged and bare. The timber rarely reaches higher than 1,500–2,000 feet (460–610 m). The smaller valleys are narrow and steep, but the larger ones frequently show by their U-shaped cross section the former presence of glaciers. Glaciers may be still seen at a number of places. Chief among them are Portage Glacier, occupying the Portage Valley between the head of Turnagain Arm and Passage Canal, the two neighboring glaciers which form the headwaters of the Glacier River and Twentymile River, Explorer Glacier, and Skookum Glacier. Besides these, there are several smaller ones on tributaries of Glacier Creek.

The Seward Highway follows a portion of the southern edge of the Chugach State Park along Turnagain Arm. Turnagain Arm boasts the second highest tides in North America after the Bay of Fundy. These tides, which can reach 40 feet (12 meters), come in so quickly that they produce a wave known as a bore tide. Adventurous kayakers and surfers have taken to riding the tide as an extreme sport. Hikers should take care not to get stuck in the quicksand-like mudflats that otherwise make up the beaches along Turnagain Arm.

Turnagain Arm communities within the Municipality of Anchorage include Indian, Bird, and Girdwood, all along the north shore of the Arm. Portage, at the eastern tip or head of the Arm, is a former settlement destroyed in the 1964 Alaska earthquake. Beluga Point Site, also known as ANC-054, is an archaeological location on the north shore of the Arm, while Alaska Wildlife Conservation Center is situated at the head of the Arm near the site of Portage.

Major tributaries of Turnagain Arm include the Twentymile River, Portage River, and Placer River. Minor tributaries include Resurrection Creek, Bear Creek, Sixmile Creek, and Glacier Creek, with their branches. Resurrection Creek flows into the south side of the arm about 20 miles (32 km) east of the main body of Cook Inlet, and with Sixmile Creek, 8 miles (13 km) farther east; with its various branches, it drains a large part of the northeastern portion of Kenai Peninsula. Resurrection Creek flows in a direction slightly east of north. The town of Hope is located near its mouth. Palmer Creek is its largest tributary.

Bear Creek flows into Turnagain Arm 0.5 miles (0.80 km) east of the mouth of Resurrection Creek. It is nearly 6 miles (9.7 km) long, and follows a northwesterly course through a steep, narrow valley. Bear and Palmer creeks are the two producing streams of this part of the field, and both are connected with Hope by roads.

The drainage area of Sixmile Creek is much larger than that of Resurrection Creek, and the stream is formed by the confluence of two large branches, which unite 10 miles (16 km) south of Sunrise, the mining camp at its mouth. The larger of the two forks, known as the East Fork, is itself formed by the confluence of a number of small streams. The more important of these are Gulch and Granite creeks on the north, and Lynx and Silvertip creeks on the south. The smaller fork, Canyon Creek, flows almost directly northward and, with its eastern tributary, Mills Creek, has been the chief producer of the Turnagain Arm field.

Turnagain Arm was named by William Bligh of HMS Bounty fame. Bligh served as Cook's Sailing Master on his third and final voyage, the aim of which was discovery of the Northwest Passage. Upon reaching the head of Cook Inlet in 1778, Bligh was of the opinion that both Knik Arm and Turnagain Arm were the mouths of rivers and not the opening to the Northwest Passage. Under Cook's orders Bligh organized a party to travel up Knik Arm, which quickly returned to report Knik Arm indeed led only to a river.

Afterwards a second party was dispatched up Turnagain Arm and it too returned to report only a river lay ahead. As a result of this frustration the second body of water was given the disingenuous name "Turn Again". Early maps label Turnagain Arm as the "Turnagain River". 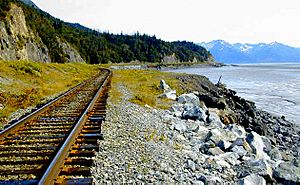 The eastern portion of Kenai Peninsula and the region about the head of Turnagain Arm present a succession of rocks, which as a whole are of remarkably uniform appearance and composition. They are of sedimentary origin and consist chiefly of fine-grained gray and bluish-black slates and gray arkoses. Interstratified with these, but in far less amount, are quartzose beds and occasional thin conglomerates. In a few places north of Turnagain Arm this series of rocks, called by Mendenhall "the Sunrise series", is cut by dikes of igneous rock of an aplitic or granitic character. These igneous rocks were not found in the region immediately south of the arm. The whole rock succession is closely folded, and the arkoses as well as the slates show cleavage, which is, however, much more perfectly developed in the slates. Immense deposits of gravel occur at a number of localities, but are especially noticeable in the valleys of Sixmile Creek, Resurrection Creek, and Kenai River. The flat-topped benches have an elevation of nearly 1,000 feet (300 m) above sea level around the lower end of Kenai Lake, and the same elevation was observed in the valleys of the streams mentioned. The bench gravels show a thickness of 100–200 feet (30–61 m) in the upper valleys, where they have been cut through by the streams. Evidences of a former period of glacial activity are seen on all sides in broad-bottomed U-shaped valleys, polished rock surfaces, and transported bowlders. The shores of Turnagain Arm afford frequent proof of ice action in glacial markings and striated pebbles. Hanging valleys are not uncommon.

The east shore along the Kenai Peninsula, from the mouth of Turnagain Arm nearly to Kachemak Bay, is low and comparatively flat, but is for the most part heavily wooded. The flora of the mountainous district about Turnagain Arm is different from that of the coastal plains of other parts of the inlet. The low country near Hope consists of a grassy tide flat, about 50 acres in extent, and a few miles of forest and occasional small swamps along the lower part of Resurrection Creek. Balsam poplars, paper birches, alders, and willows abound near the streams, and spruces (Picea canadensis and Picea sitchensis) and hemlocks (Tsuga mertensiana) are common on the slopes and slightly elevated flats. A third species of spruce (Picea mariana) is found in the small peat bogs, along with smaller Hudsonian plants. (Ledum), crowberry (Empetrum), and dwarf birch (Betula glandulosa) are in profusion. Of the larger trees, the hemlock is abundant, but it is exceeded in individual size by the spruces. The conifers ascend the mountain slopes to about 2,000 feet (610 m) but above that point rapidly disappear. Beyond this elevation are alder thickets, small patches of dwarf willows and birches, and vast stretches of waving grass from 1–3 feet (0.30–0.91 m) high.

Still higher, the slopes and rounded backs of the ridges are cushioned with a mass of heather and heather-like shrubs, chiefly Empetrum nigrum. This extends up to an approximate altitude of 5,000 feet (1,500 m), above which there is very little or no plant growth. The whole country is characterized by the abundance of high grass; otherwise it is a typical Hudsonian-Alpine region.

All content from Kiddle encyclopedia articles (including the article images and facts) can be freely used under Attribution-ShareAlike license, unless stated otherwise. Cite this article:
Turnagain Arm Facts for Kids. Kiddle Encyclopedia.