Mount Alpenglow is a 4,816-foot (1,468 m) landmark mountain located in the Kenai Mountains, in the U.S. state of Alaska. The peak is situated in Chugach National Forest, 8 mi (13 km) southwest of Girdwood, Alaska, on the south shore of Turnagain Arm, opposite Bird Point from where it can be prominently seen from the Seward Highway and the Alaska Railroad. Mount Alpenglow is the highest peak alongside Turnagain Arm, and although modest in elevation, relief is significant since the northern aspect of the mountain rises nearly a vertical mile in only one mile from the sea-level shores. The summit of Penguin Peak offers another good view of Alpenglow 6 mi (10 km) directly across the arm.

The mountain's name was officially adopted in 1969 by the United States Geological Survey. The mountain was so named since it often displays the post-sunset pink glow known as alpenglow for travelers on the Seward Highway and skiers at Alyeska Resort.

Based on the Köppen climate classification, Mount Alpenglow is located in a subarctic climate zone with long, cold, snowy winters, and mild summers. Temperatures can drop below −20 °C with wind chill factors below −30 °C. May and June are the best months for climbing in terms of catching favorable weather. 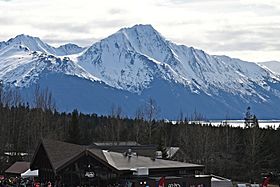 All content from Kiddle encyclopedia articles (including the article images and facts) can be freely used under Attribution-ShareAlike license, unless stated otherwise. Cite this article:
Mount Alpenglow Facts for Kids. Kiddle Encyclopedia.