The facility can be easily accessed by the Metro Green Line Mariposa/Nash Station the fields are just walking distance from the station.

Part of Campus El Segundo The Edge at Campus El Segundo is a 220,000 square foot (14 acres) high-quality business park with 15 two-story buildings and 20,000 SF of support retail it is currently being developed by Mar Ventures, Inc. and AMB Property Corporation. Located in El Segundo, 801 Parkview Drive North has convenient access to the beach communities from Palos Verdes to Santa Monica, a direct on-ramp to the 105 Freeway with the San Diego 405 Freeway approximately one mile away and proximity to both LAX and the Metro Greenline Rail. The building size and number of window openings, filled with high-performance glass, coupled with aluminum composite panels, cornices and canopies make the buildings aesthetically pleasing. Many observers have noted they find it hard to believe the buildings are tilt-up. 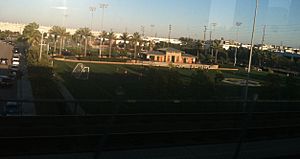 The prime usage of the field is soccer. Many teams use Campus as their training ground.

Many recreational lacrosse players use Campus El Segundo to practice or play.

All content from Kiddle encyclopedia articles (including the article images and facts) can be freely used under Attribution-ShareAlike license, unless stated otherwise. Cite this article:
Campus El Segundo Athletic Fields Facts for Kids. Kiddle Encyclopedia.