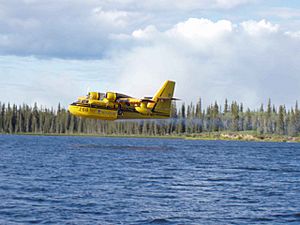 The Canadair CL-215 is a Canadian sea plane dedicated to firefighting and air transport. It is a twin-engine aircraft. It is, and it was, used in Canada, France, Greece, Turkey, and USA. Bombardier CL-415 is a modernized variant.

All content from Kiddle encyclopedia articles (including the article images and facts) can be freely used under Attribution-ShareAlike license, unless stated otherwise. Cite this article:
Canadair CL-215 Facts for Kids. Kiddle Encyclopedia.