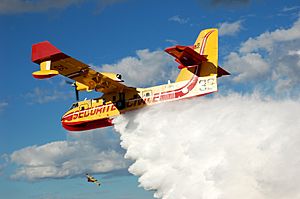 A water bomber is an aircraft dedicated to firefighting, and in particular for forest fires. It can be a helicopter or a sea plane. Generally it is a conversion of a former military or cargo aircraft, but some were designed and built at the beginning like water bombers. It is the case of Canadian Canadair CL-215. Water bombers are used both by air forces, administrations, and private societies.

All content from Kiddle encyclopedia articles (including the article images and facts) can be freely used under Attribution-ShareAlike license, unless stated otherwise. Cite this article:
Water bomber Facts for Kids. Kiddle Encyclopedia.