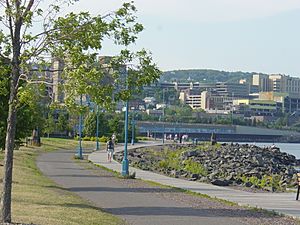 Both tourists and locals enjoy the Lakewalk 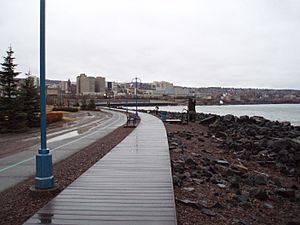 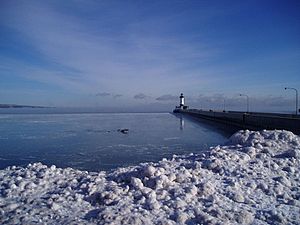 Canal Park is a tourist and recreation-oriented district of Duluth, Minnesota, United States. Situated across the Interstate 35 freeway from Downtown Duluth, it is connected by the Aerial Lift Bridge to the Park Point sandbar and neighborhood. Canal Park Drive and Lake Avenue South serve as the main routes in Canal Park.

Canal Park is largely a conversion of an old warehouse district into restaurants, shops (especially those dealing in antiques and other novelties), cafés, and hotels. This conversion began in the 1980s as an attempt to use Duluth's rich industrial past, the decline of which had left the city in economic turmoil at the time, as an asset in a prospective tourist industry. The Duluth Entertainment Convention Center (DECC) now connected to the new Amsoil Arena and the area's prominent entertainment venue, is also located in the district. The DECC provides an indoor connection to the skywalk system in Downtown Duluth.

Many annual events are held in the Canal Park area, such as the Bayfront Blues Festival and Grandma's Marathon, which starts in Two Harbors, Minnesota, and finishes in Canal Park.

Some of Canal Park's attractions include a 4.2 mile long lakewalk, a lighthouse pier, the Lake Superior Maritime Visitor Center, the Great Lakes Aquarium, and the William A. Irvin floating ship museum. Those interested in boats will also enjoy watching vessels from around the world enter Duluth's port.

All content from Kiddle encyclopedia articles (including the article images and facts) can be freely used under Attribution-ShareAlike license, unless stated otherwise. Cite this article:
Canal Park, Duluth Facts for Kids. Kiddle Encyclopedia.