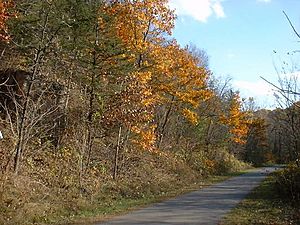 The Cannon Valley Trail is a paved rail trail that follows the Cannon River in southeast Minnesota.

The trail follows an abandoned Chicago Great Western Railway corridor for 20 miles (32 km) between Cannon Falls, Minnesota and Red Wing, Minnesota. In the spring, summer, and fall months, the trail is open to hiking, biking, and inline skating. In the winter months, the trail is groomed for cross-country skiing.

Local private citizens purchased the railroad roadbed for a recreational trail in 1983 following the C&NWs (the successor to the CGW) decision to abandon the line. The trail is managed by a joint powers board consisting of representatives from Cannon Falls, Red Wing and Goodhue County, Minnesota. 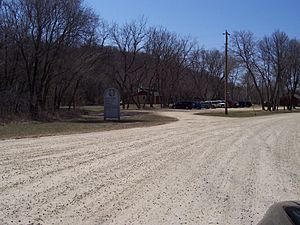 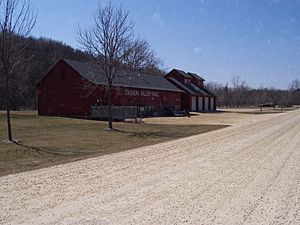 In Red Wing, the trail connects to the Goodhue Pioneer State Trail.

All content from Kiddle encyclopedia articles (including the article images and facts) can be freely used under Attribution-ShareAlike license, unless stated otherwise. Cite this article:
Cannon Valley Trail Facts for Kids. Kiddle Encyclopedia.