Goodhue County is a county in the U.S. state of Minnesota. As of the 2020 census, the population was 47,582. Its county seat is Red Wing. Nearly all of Prairie Island Indian Community is within the county.

The county was formed from territory within Wabasha County on March 5, 1853. County boundaries were defined in 1854 and further refined again in 1855.

Hamline University, Minnesota's first college of higher learning, was originally located in Red Wing, Minnesota. It opened its doors in 1854 but closed during the Civil War due to low enrollment. Hamline University re-opened in Saint Paul, Minnesota in 1869.

The county was a leading producer of wheat during the mid-nineteenth century, and for several years the county boasted the highest wheat production in the country, sending wheat through numerous mills in Red Wing and then transporting the grain along the Mississippi River.

The effect of fires at two of Red Wing's mills in the 1880s and developing railroad routes across Minnesota encouraged farmers from neighboring counties to begin sending their wheat to Minneapolis mills, reducing the county's importance in the wheat trade around the start of the 20th century.

The first municipal swimming pool in the state was built in the county.

In October 1960, President Dwight D. Eisenhower visited the county for a bridge dedication ceremony. The Hiawatha Bridge had been built to replace the Old High Bridge that spanned the Mississippi River since 1895. This visit drew 20,000 people. Eisenhower hoped that his visit would help in the elections, swaying Minnesota voters to vote for Richard Nixon in the 1960 presidential election in the coming month. The visit wasn't enough, however, as John F. Kennedy carried the state on his way to being elected the next president. 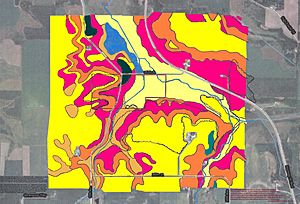 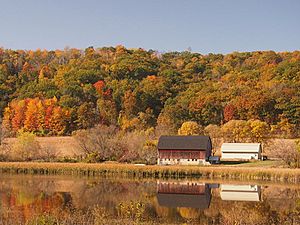 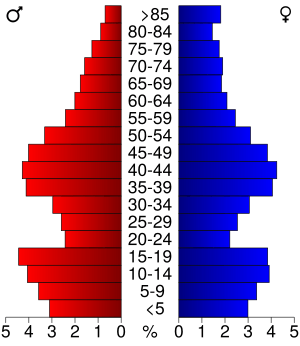 All content from Kiddle encyclopedia articles (including the article images and facts) can be freely used under Attribution-ShareAlike license, unless stated otherwise. Cite this article:
Goodhue County, Minnesota Facts for Kids. Kiddle Encyclopedia.