Dodge County is a county in the U.S. state of Minnesota. The population was 20,087 as of the 2010 census. Its county seat is Mantorville.

Like many counties in Minnesota, Dodge County was originally inhabited by American Indians. The area was a common hunting and battle ground for the Mdewakanton Sioux, often fighting the Sauk and Fox Indians who had wandered into their territory. The first white person to visit Dodge County, however, is not known. It is believed by some that a French fur trader from Canada was the first, setting foot on its soil in the spring of 1655. Guides deemed this area unsafe due to the Natives living there. But, it was not until over two hundred years later the locality truly came to life.

The original founders of Dodge County were settlers from New England. These people were "Yankee's", that is to say they were descended from the English Puritans who settled New England in the 1600s. They were part of a wave of New England farmers who headed west into what was then the wilds of the Northwest Territory during the early 1800s. Most of them arrived as a result of the completion of the Erie Canal. When they arrived in what is now Dodge County there was nothing but a virgin forest and wild prairie, the New Englanders laid out farms, constructed roads, erected government buildings and established post routes. They brought with them many of their Yankee New England values, such as a passion for education, establishing many schools as well as staunch support for abolitionism. They were mostly members of the Congregationalist Church though some were Episcopalian. Culturally Dodge County, like much of Minnesota would be culturally very continuous with early New England culture, for most of its history. It was in 1853 that government surveyors set lines for the townships. A year later, the Mantor brothers, along with Eli P. Waterman, established their claims, which would later be an important town to the area known as "Mantorville." Still a year later, in 1855, Dodge County was organized for local government. Later on in its history, immigrants from Germany, Sweden and Norway would settle in the county. With increasing growth and improvement, Dodge County was officially placed in the Fifth Judicial District by the State Constitution on May 11, 1858. Its name was given in honor of Wisconsin governor Henry Dodge. The Dodge County Courthouse, designed by E. Townsend Mix and built of locally quarried limestone in 1865, is the oldest working courthouse in Minnesota.

Dodge County is located in the Southeastern part of Minnesota and spans 24 miles (39 km) long and 18 miles (29 km) wide. To the North and center of the county, it is hilly, high, and rolling with pebbly, loose soil, laid with a considerable amount of timber. This makes it well-suited for grain raising. The Southern part is quite the opposite. Being it is flat and wet, it's adapted perfectly for grazing and raising stock. The soil in this area is excellent for yielding huge crops, considering its extremely fertile soil. The heavy, black, clay loam makes this area a prime location for agriculture. Dodge is one of seven southern Minnesota counties that have no forest ecosystems; only prairie and savanna soils exist here.

Dodge County's plentiful amount of sand and rock also make the area a center for building. Quarries in Mantorville were once enterprises and consist of layers of thick stone which can be cut into any desired shape. Wasioja is also known around the nation for its excellent "Wasioja stone." 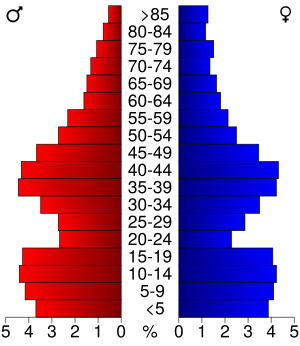 Dodge Center Municipal Airport is the only public airport in the county.

All content from Kiddle encyclopedia articles (including the article images and facts) can be freely used under Attribution-ShareAlike license, unless stated otherwise. Cite this article:
Dodge County, Minnesota Facts for Kids. Kiddle Encyclopedia.