Kasson is a city in Dodge County, Minnesota, United States. The population was 5,931 at the 2010 census. The city is located 13 miles (21 km) west of Rochester, Minnesota along U.S. Highway 14 and is one of the endpoints of Minnesota State Highway 57. The Dakota, Minnesota and Eastern Railroad's main freight rail line also runs through the city. Kasson shares a school system with nearby Mantorville, Minnesota (the "K–M Komets"). The K–M school system is a member of the Zumbro Education school district (ZED). Kasson is part of the Rochester, MN Metropolitan Statistical Area.

According to Warren Upham, superintendent of the Minnesota Historical Society from 1896–1934, the city of Kasson was incorporated on February 24, 1870, and again on April 22, 1916, separating from the township on March 21, 1917. The town was named after Jabez Hyde Kasson, owner of the original townsite. Kasson was born on January 17, 1820 and moved to Minnesota in 1856. He settled on a farm in the township, and laid out the village along with others. The plat was recorded on October 13, 1865. It had a station of the Chicago and North Western Transportation Company, and its post office opened in 1866.

According to the United States Census Bureau, the city has a total area of 3.00 square miles (7.77 km2), all of it land. Kasson is located 15 miles (24 km) west of Rochester, Minnesota,and 3 miles (4.8 km) south of Mantorville, Minnesota.

There were 2,224 households of which 41.3% had children under the age of 18 living with them, 56.0% were married couples living together, 9.3% had a female householder with no husband present, 5.2% had a male householder with no wife present, and 29.5% were non-families. 25.2% of all households were made up of individuals and 11.1% had someone living alone who was 65 years of age or older. The average household size was 2.65 and the average family size was 3.18. 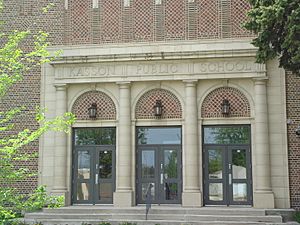 Due to efforts of Kasson's non-profit historic preservation group Kasson Alliance for Restoration (KARE), the 2012-era Kasson Public School building has officially been placed on the National Register of Historic Places. Kasson's elementary and high school students began using the stately building on December 5, 1918. The school's nomination to the National Register was approved on December 6, 2007, almost exactly 89 years to the day after that moment in 1918.

The Kasson Public School joins the Jacob Leuthold Jr. House, the Eureka Hotel, the Kasson Municipal Building, and the 1895 Kasson Water Tower on the list of Kasson’s buildings on the National Register of Historic Places. 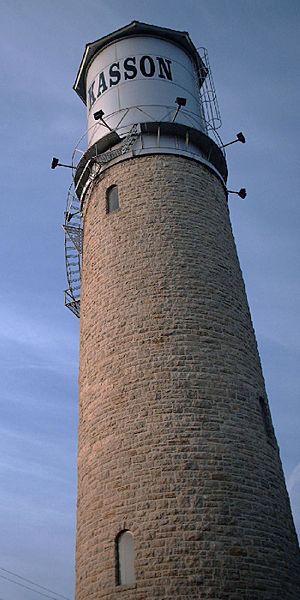 The Kasson Alliance for Restoration (KARE) and the City of Kasson co-sponsored an Historic Properties Reuse Study to investigate ways to use the Kasson Public School building. The Reuse Study Report was published in October 2009. A citizen task force was formed in November 2009 and began meeting in January 2010 to investigate the adaptive reuses options outlined in the report which included a survey distributed to all of Kasson's 5,000 citizens. 581 citizens responded. In May 2010 the Task Force presented the survey results to the City Council. 58% of the respondents favored rehabilitating/reusing the school. At a city council meeting in August 2010, Mayor Tim Tjosaas asked the council to form a Library Building Committee (LBC) composed of citizen volunteers which was approved. The LBC began meeting in September 2010. In February 2011 the LBC announced that they had met with Deb Parrott of the engineering and architecture firm Widseth, Smith, Nolting and Associates. Ms. Parrott, who has experience with library design, was asked to prepare three library design proposals for the historic school as follows: 1) total rehabilitation of the 1918 school building, 2) a partial or modified rehabilitation of the school building and 3) a completely new structure on the general footprint of the existing building (note: after demolition of the 1918 school).

Kasson is known for its annual Festival in the Park celebration in August, a volunteer-organized weekend with events celebrating the town's heritage and bringing together members of the community. The festival began in 1991 and has continued to grow over the years, including traditional events like a parade, a fireworks display, and the "Miss Kasson" ceremony, which was recently changed to "Kasson Ambassador," allowing men to take part. More recent events include a bellyflop contest, an eating contest, and a musical showcase. The Festival in the Park takes place the second weekend in August every year at the North Park.

All content from Kiddle encyclopedia articles (including the article images and facts) can be freely used under Attribution-ShareAlike license, unless stated otherwise. Cite this article:
Kasson, Minnesota Facts for Kids. Kiddle Encyclopedia.