Dodge Center, is a city in Dodge County, Minnesota, United States. Approximately 15 miles west of Rochester, the population of Dodge Center was 2,670 at the 2010 census. Dodge Center is part of the Rochester, MN Metropolitan Statistical Area. 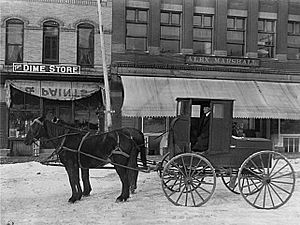 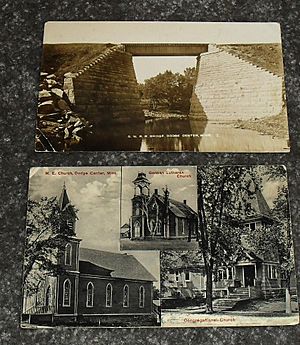 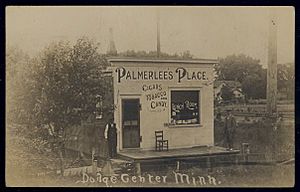 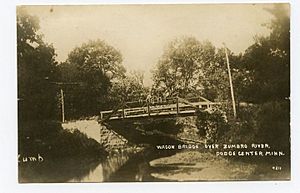 The Dodge Center area was first settled by pioneers in the 1850s. The town was created by the railroad system and named for its central location within Dodge County, Minnesota, which was named for Henry Dodge, twice the governor of Wisconsin.

The first train to reach Dodge Center arrived on July 13, 1866. Shortly after, D.L. Tyler moved to Dodge Center from Ashland (which had no railroad) and built its first general store in 1867. Tyler also became the town's first postmaster.

Dodge Center's site was officially platted in 1867 and recorded in July 1869. In January 1870, the legislature passed a bill changing the town's name to Silas. The bill was reconsidered the next day and no further action was taken. The town remained Dodge Center and was incorporated in February 1872 by special act of the legislature.

Early Dodge Center was a farming community known for growing grain. Grain wagons lined up and down Main Street and into the surrounding countryside waiting their turn at either of two grain elevators.

By 1870, Dodge Center's population had grown to 400-500. The two grain elevators, a gun shop, Tyler's general store and The Kinney House (a hotel widely known in the region and later burned) had become established businesses. The Chicago and North Western Railroad depot had also been completed. Also by 1870, the one-room schoolhouse, in which a Mrs. Rice taught, had become too small. Realizing the importance of education, the people of Dodge Center built a wooden, L-shaped, two-story schoolhouse, costing about $15,000. The first high school commencement exercises were held in 1885.[2] When that school was also outgrown, a new brick building was constructed in 1898.

The 1870 school was cut in half and converted. One half became an opera house (where the Assembly of God church now stands) and the other half became apartments directly across the street. The opera house was one of the grandest in southeastern Minnesota, with a large stage, balcony and opera seats. The opera house eventually became a church and was destroyed by fire in 1948. The apartments were demolished in the 1980s.

The 1898 building, at the corner of 1st Ave NW and 3rd Street NW, was used until 1972. A gymnasium, auditorium and two classrooms were added in 1936, part of President Franklin Roosevelt's WPA program. An addition containing a library and home-economics room was added in 1950 and an elementary school building was constructed in 1958. Of the 1890s portion of the building (demolished in 1972), one stairwell and a classroom still exist. The small 1898 portion and the 1936, 1950 and 1958 additions remain standing and are owned by a private entity (as of August 2007); they house apartments with several small businesses. A new high school was erected on the western edge of town in 1972 and is still in use.

Along with the Kinney House, the Windsor Hotel developed a fine reputation throughout the region. A third hotel, the Hartley House, was built just south of the Chicago Great Western station. It burned one night, killing a traveling female teacher.

Dodge Center's first permanent doctor was Steven W. Ranson, who began practicing there in June 1870. He also opened a drug store in 1872. In 1875 Dr. James A. Garver, of Ohio, moved from Wasioja to Dodge Center, where he continued to live and practice the rest of his life.

The Joseph Garrison post of the Grand Army of the Republic was established with 22 charter members in 1885. Garrison was the second man from Dodge County to lose his life in the American Civil War. He died in Libby Prison of wounds suffered in the Battle of Bull Run.

A large three-story roller mill was built in 1887. It had a national reputation for the fine quality of its flour and won first prize at the Chicago World's Fair in 1893. The mill and its brand were later sold. It was later destroyed by fire.

The Minnesota and Northwestern Railroad came to Dodge Center in 1885, the name being changed to Chicago Great Western in 1892. The track ran from Minneapolis, MN to Oelwein, IA. The last section of track to be completed was the long trestle across the Zumbro River, north of Dodge Center.

The Methodist Church was constructed in 1878 and was used by the congregation until 1958 when it moved into the current building. The Congregational Church community began to move to Dodge Center from Wasioja, MN in 1875.

According to the United States Census Bureau, the city has a total area of 2.08 square miles (5.39 km2), all of it land.

There were 998 households of which 40.4% had children under the age of 18 living with them, 49.2% were married couples living together, 11.2% had a female householder with no husband present, 5.6% had a male householder with no wife present, and 34.0% were non-families. 26.0% of all households were made up of individuals and 11.4% had someone living alone who was 65 years of age or older. The average household size was 2.62 and the average family size was 3.19.

There were 824 households out of which 42.0% had children under the age of 18 living with them, 53.0% were married couples living together, 12.9% had a female householder with no husband present, and 28.6% were non-families. 23.5% of all households were made up of individuals and 11.0% had someone living alone who was 65 years of age or older. The average household size was 2.61 and the average family size was 3.03.

Dodge Center is home to Dodge Country Club. Founded in the late 1960s, it is located on the West side of the city. Dodge Country Club is an 18-hole, executive length public golf course. The course, as well as its club house, is a regular social gathering place for those throughout the region. A neighborhood began developing around Dodge Country Club in the 1970s and continues to develop today as both the course and Triton schools prosper.

The Natalie Webb Aquatic Center was opened in 2008 and is named for Natalie (Thornton) Webb, who was a 1999 Triton Alumna, Miss Dodge Center and former Dodge Center YMCA Pool lifeguard and manager. The community felt a loss when she succumbed to a brave struggle against cancer in 2004. This space was named in her honor due to her passion for swimming and lifeguarding in Dodge Center. The community raised money and built the Natalie Webb Aquatic Center to remember and honor Natalie's spirit. It is enjoyed by people throughout the region.

U.S. Highway 14 and Minnesota State Highway 56 are two of the main routes in the city. Dodge Center Airport (TOB) is located in the city.

The city is located along the mainline of the Dakota, Minnesota and Eastern Railroad, a subsidiary of Canadian Pacific. This east-west line had been owned by the Chicago and North Western Railway until the 1980s when DM&E was formed. Dodge Center also used to be on the Chicago Great Western mainline which ran south from St. Paul down through Iowa and across to Chicago, Illinois. However, the CGW right-of-way has since been abandoned. There were at least three train stations built in the town over the years. Two of these still exist, though they have been repurposed.

All content from Kiddle encyclopedia articles (including the article images and facts) can be freely used under Attribution-ShareAlike license, unless stated otherwise. Cite this article:
Dodge Center, Minnesota Facts for Kids. Kiddle Encyclopedia.