Pine Island is a small city of about 3,500 residents in Goodhue and Olmsted counties in the U.S. state of Minnesota. Most of Pine Island is in Goodhue County, but a small part extends into Olmsted County, making that portion part of the Rochester metropolitan area.

The community has a strong agricultural base, but has been transitioning over time into a bedroom community for nearby Rochester, which employs many local residents. Large development is planned for the Olmsted County side as it becomes a Rochester suburb, including the Elk Run Bioscience Park and Minnesota's first diverging diamond interchange.

Pine Island was platted in 1856. A post office has been in operation at Pine Island since 1856.

U.S. Highway 52 serves as a main route in the community. 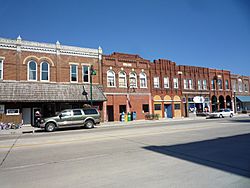 The town is mentioned in the title and text of James Wright's poem Lying in a Hammock at William Duffy's Farm in Pine Island, Minnesota.

Ralph Wilford Samuelson, the inventor of waterskiing, moved to Pine Island from Lake City, Minnesota to raise turkeys and remained until his death.

All content from Kiddle encyclopedia articles (including the article images and facts) can be freely used under Attribution-ShareAlike license, unless stated otherwise. Cite this article:
Pine Island, Minnesota Facts for Kids. Kiddle Encyclopedia.