Kids Encyclopedia Facts
This page is about the city of Faribault, Minnesota. For the county with the same name, see Faribault County, Minnesota. 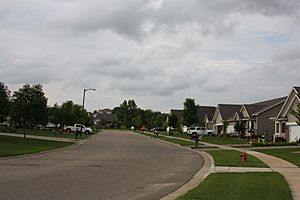 Faribault (/ˈfɛərboʊ/ FAIR-boh) is a city in Rice County, Minnesota, United States. It is the county seat. The population was 23,352 at the 2010 census. Faribault is approximately 50 miles (80 km) south of Minneapolis and St. Paul.

Interstate 35 and Minnesota State Highways 3, 21, and 60 are four of the main routes in the community.

Faribault is situated at the confluence of the Cannon and Straight Rivers in southern Minnesota.

Faribault is regarded as one of the most historic communities in Minnesota, with settlement and commercial activity predating Minnesota’s establishment as a U.S. Territory. Prior to 1745, the area was primarily occupied by the Wahpekute band of Dakotah. Shortly thereafter, the tribe was driven south after several clashes with the Ojibwe over territory.

The city's namesake, Alexander Faribault, was the son of Jean-Baptiste Faribault, a French-Canadian fur trader and Elizabeth Pelagie Kinzie Haines, a woman of the Dakotah tribe. He is credited with fueling most of the early settlement activity in the area beginning in 1826, when he established a fur trading post on the banks of the Cannon River. By 1834, the trading post had grown in popularity and was relocated to the Straight River, one mile (1.6 km) upstream of its junction with the Cannon River, the site of modern-day Faribault. The young Alexander Faribault used his knowledge of Dakotah language and culture to improve relations with the displaced Wahpekute and even helped the tribe to resettle in the area. This relationship was instrumental in ensuring the success of the trading post and allowing safe travel to the area for settlers.

Another source maintains the city is named for Jean-Baptiste Faribault.

The Alexander Faribault House was built in 1853 by Alexander Faribault at a cost of $4,000. The house is considered the oldest framed structure in the area, and still stands in its original location near the southeastern edge of Faribault's historic downtown district.

The years following the construction of this first building brought unprecedented growth, development, and economic prosperity for the young settlement. Spurred by the completion of the area's first steam-powered sawmill in early 1854, the next year would bring Faribault from a sleepy settlement of 20 buildings to a bustling town with more than 250 buildings. Historians attribute Faribault's impressive growth during this period to a number of important milestones which were passed in 1855 and 1856, including the creation of roads connecting to other settlements and trading posts in Iowa and Minnesota Territory, the availability of mail service, and the construction of schools and churches.

The City of Faribault was platted in 1855 and granted a home-rule charter in 1872.

According to the United States Census Bureau, the city has a total area of 15.67 square miles (40.59 km2); 15.32 square miles (39.68 km2) is land and 0.35 square miles (0.91 km2) is water. The confluence of the Straight River and the Cannon River is located within city limits. Sakatah Lake State Park and Nerstrand-Big Woods State Park are nearby.

Faribault County, Minnesota, roughly 100 miles (160 km) to the southwest, is unrelated to the city of Faribault. Interstate Highway 35 runs along the western edge of the city. The city is served by two full interchanges and one partial interchange. Prior to completion of Interstate 35, traffic was routed directly through town; generating significant sales revenue to many retailers which literally had a major highway running directly past their doors. In approximately 1975, the last portions of Interstate 35 were completed and all traffic finally started to move around (and not through) Faribault. On that same corridor through town, the White Sands Swimming Pool ("Minnesota's Largest Outdoor Swimming Pool") operated from 1964 to 1977. This swimming area is now the White Sands Dog Park, as well as the trailhead for the Sakatah Singing Hills Trail which runs to Mankato and the future Mill Towns Trail is planned to run to Northfield. The site includes parking, restrooms and a shelter.

There were 8,317 households of which 36.4% had children under the age of 18 living with them, 44.5% were married couples living together, 12.4% had a female householder with no husband present, 5.7% had a male householder with no wife present, and 37.4% were non-families. 31.0% of all households were made up of individuals and 11.7% had someone living alone who was 65 years of age or older. The average household size was 2.50 and the average family size was 3.12.

There were 7,472 households out of which 34.7% had children under the age of 18 living with them, 50.3% were married couples living together, 11.3% had a female householder with no husband present, and 33.8% were non-families. 28.5% of all households were made up of individuals and 11.8% had someone living alone who was 65 years of age or older. The average household size was 2.53 and the average family size was 3.10.

The Minnesota State Academies for the Deaf and for the Blind, including the State Library for the Blind, are located in the southeast part of the city above the Straight River. Noyes Hall, a neoclassical building on the campus of Minnesota State Academy for the Deaf, is listed on the National Register of Historic Places. The building is named for Jonathon L. Noyes, long-time administrator of the school.

The Thomas Scott Buckham Memorial Library is the city library.

The Faribault Correctional Facility is a state prison located on the campus of a former mental hospital (aka "The State Schools").

The River Bend Nature Center is a 750-acre (3.0 km2) non-profit nature center in the southeast corner of Faribault.

All content from Kiddle encyclopedia articles (including the article images and facts) can be freely used under Attribution-ShareAlike license, unless stated otherwise. Cite this article:
Faribault, Minnesota Facts for Kids. Kiddle Encyclopedia.