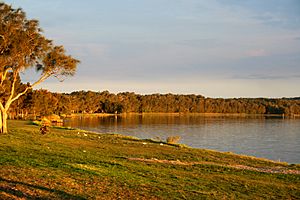 Canton Beach is a suburb located on the Central Coast of New South Wales, Australia, as part of the Central Coast Council local government area. It is next to Toukley which is a large residential and holiday town.

All content from Kiddle encyclopedia articles (including the article images and facts) can be freely used under Attribution-ShareAlike license, unless stated otherwise. Cite this article:
Canton Beach, New South Wales Facts for Kids. Kiddle Encyclopedia.