Kids Encyclopedia Facts
This page is about the diver. For the physicist, see Yuan Cao.
In this Chinese name, the family name is Cao.

Cao Yuan (simplified Chinese: 曹缘; traditional Chinese: 曹緣; pinyin: Cáo Yuán; born 7 February 1995) is a Chinese diver and an Olympic gold medalist, having won three golds, one silver and one bronze in the Olympics. He has also won golds in diving at the World Championships and World Cups.

Cao Yuan was born on 7 February 1995 in Hunan province. Cao Yuan started diving at age 5. His mother wanted him to learn discipline so enrolled him in diving classes.

His life motto is "Go your own way and see your own scenery. Be calm for life's ups and downs." 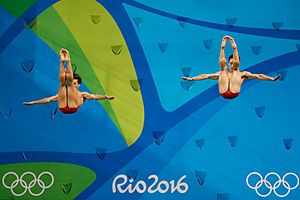 Cao Yuan and Qin Kai at the 2016 Olympics

He competed at the 2012 Summer Olympics in the Men's synchronized 10-metre platform, winning the gold medal. He won the gold medal at 2010 Asian Games in Men's 10-meter platform at the age of 15.

Cao Yuan together with Yue Lin are the only divers to ever win two World Series gold medals on the same day of the competition by winning the 3m synchro and 10m synchro events on 30 May 2014.

In 2015, he partnered with Qin Kai on the men's 3m synchro springboard at the World Championships in Kazan and won gold.

At the 2016 Summer Olympics in Rio, Cao led throughout the competition in the men's 3m springboard event, and won gold with a score of 547.60. He also won bronze in the 3m springboard synchronized dive with Qin Kai.

In 2017, at the World Champinships in Budapest, Cao won silver pairing with Xie Siyi in the 3m synchro. In the 2018 World Cup, he won a gold in the 3m synchro with Xie, as well as a silver in the individual 3m springboard.

At the 2019 World Aquatics Championships held in Gwangju, South Korea, Cao Yuan won gold in both the men's synchronised diving events. In the 3m synchro with Xie, the pair won with their last two dives, and he also won with Chen Aisen in the 10m synchro.

In 2014, he was named the Male Diver of the Year by the International Swimming Federation (FINA). He was again given the accolade in 2018.

He received the 4 May Youth Medal of Beijing in the People's Republic of China in 2014.

All content from Kiddle encyclopedia articles (including the article images and facts) can be freely used under Attribution-ShareAlike license, unless stated otherwise. Cite this article:
Cao Yuan Facts for Kids. Kiddle Encyclopedia.