Gregory Efthimios Louganis (born January 29, 1960) is an American Olympic diver, LGBT activist, and author who won gold medals at the 1984 and 1988 Summer Olympics, on both the springboard and platform. He is the only male and the second diver in Olympic history to sweep the diving events in consecutive Olympic Games. He has been called both "the greatest American diver" and "probably the greatest diver in history".

Louganis was born in El Cajon, California, and is of Samoan and Swedish descent. His teenage biological parents placed him for adoption when he was eight months old and he was raised in California by his adoptive parents, Frances and Peter Louganis. His adoptive father was of Greek descent. He started taking dance, acrobatics and gymnastics classes at 18 months, after witnessing his sister's classes and attempting to join in. By the age of three, he was practicing daily and was competing and giving public performances.

For the next few years, he regularly competed, and performed at various places including nursing homes and the local naval base. As a child, he was diagnosed with asthma and allergies, so to help with the conditions, he was encouraged to continue the dance and gymnastics classes. He also took up trampolining, and at the age of nine began diving lessons after the family got a swimming pool. He attended Santa Ana High School in Santa Ana, California; Valhalla High School in El Cajon, California; as well as Mission Viejo High School, in Mission Viejo, California.

In 1978, he subsequently attended the University of Miami, where he majored in drama and continued diving. In 1981, he transferred to the University of California, Irvine, where in 1983, he graduated with a major in theatre and a minor in dance.

As a Junior Olympic competitor, Louganis caught the eye of Dr. Sammy Lee, two-time Olympic champion, who began coaching him. At sixteen Louganis took part in the 1976 Summer Olympics in Montreal, where he placed second in the tower event, behind Italian sport legend Klaus Dibiasi. Two years later, with Dibiasi retired, Louganis won his first world title in the same event with the help of coach Ron O'Brien.

Louganis was a favorite for two golds in the 1980 Summer Olympics in Moscow, but an American boycott of the games prevented him from participating. He was one of 461 athletes to receive a Congressional Gold Medal years later. Louganis won two titles at the world championships in 1982, where he became the first diver in a major international meeting to get a perfect score of 10 from all seven judges. At the 1984 Los Angeles Olympics, with record scores and leads over his opponents, Louganis won gold medals in both the springboard and tower diving events.

At the 1988 Seoul Olympics, his head struck the springboard during the preliminary rounds, leading to a concussion. He completed the preliminaries despite his injury. He then earned the highest single score of the qualifying round for his next dive and repeated the dive during the finals, earning the gold medal by a margin of 25 points. In the 10m finals, he won the gold medal, performing a 3.4 difficulty dive in his last attempt, earning 86.70 points for a total of 638.61, surpassing silver medalist Xiong Ni by only 1.14 points. His comeback earned him the title of ABC's Wide World of Sports "Athlete of the Year" for 1988.

Louganis had been a theatre major in college, and in the late 1980s and 1990s, Louganis acted in several movies, including Touch Me in 1997.

In 2008 he appeared in the film Watercolors, in the role of Coach Brown, a swimming instructor in a high school.

In 2012, he appeared in the penultimate episode of the second season of IFC's comedy Portlandia, playing himself.

After retiring from diving, Louganis began to compete in dog agility competitions; he has said that being around the dogs gave him "a sense of security, company and unconditional love". His dogs have included Dr. Schivago; Captain Woof Blitzer; Nipper and son, Dobby, both champion Jack Russell terriers; Gryff (Gryffindor), a border collie; and Hedwig, a Hungarian Puli. Nipper was named for the RCA dog, while Gryff, Dobby and Hedwig were named for Harry Potter characters, as Louganis is a self-described "huge Harry Potter fan."

Since November 2010, Louganis has been coaching divers of a wide range of ages and abilities in the SoCal Divers Club in Fullerton, California. He was a mentor to the US diving team at the London 2012 Olympics and the Rio de Janeiro 2016 Olympics. 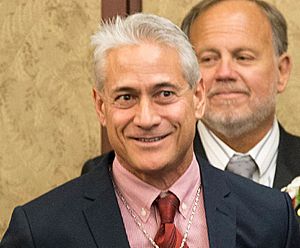 Louganis in 2016 at an event celebrating the 25th anniversary for the passage of the Ryan White CARE Act, which improved the quality and availability of healthcare for individuals and families with HIV/AIDS

Louganis is a gay rights activist, as well as an HIV awareness advocate. He has worked frequently with the Human Rights Campaign to defend the civil liberties of the LGBT community and people diagnosed with HIV/AIDS.

In the October/November 2010 issue of ABILITY Magazine, Louganis stated that the "Don't Ask, Don't Tell" policy was "absurd," "unconstitutional," and a "witch-hunt." He added that "gay men and women have been serving this country for years … [it's] basically encouraging people who are serving our country to lie to each other."

Louganis is on the board of directors to the USA-based chapter of the charitable foundation of Princess Charlene of Monaco. 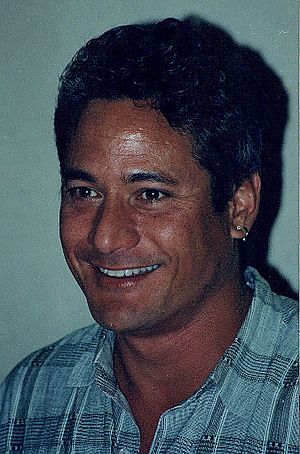 Louganis publicly came out as gay in a pre-taped announcement shown at the opening ceremony of the 1994 Gay Games, having been persuaded to do so by Gay Games organizers. Even before then, he led what has been described as "an openly gay life".

In 1995 he announced that he was HIV-positive, around the time of the release of his memoir, Breaking the Surface. In a 1995 interview with Barbara Walters, Louganis spoke publicly for the first time about being gay and HIV-positive.

Louganis announced his engagement to his partner, paralegal Johnny Chaillot, in People magazine, in June 2013. The two were married on October 12, 2013.

All content from Kiddle encyclopedia articles (including the article images and facts) can be freely used under Attribution-ShareAlike license, unless stated otherwise. Cite this article:
Greg Louganis Facts for Kids. Kiddle Encyclopedia.