The Cape Byron Marine Park caters to both commercial and recreational uses including fishing, swimming, diving, walking, and other beach activities.

Open Oceans play an important role in the local marine environment due to the impact of ocean currents, temperatures and productivity which influences food source availability and habitat.

The Cape Byron Marine Park is home to several species of Flora which play a significant role in the local ecosystems by being a source of food, habitat, breeding grounds for the local marine animals and birdlife. The flora also plays a role in increasing water quality and the filtering of sediments which create a more hospital and livable environment for the local marine life. The significant species within the Cape Byron Marine Park include Mangroves, Seagrasses, Kelp, Saltmarshes and algae.

The Seagrass found in the Estuaries, (Zostera capricorni), is an important habitat for many fish and crustaceans including dugongs and green turtles. They play a crucial role the nutrient and carbon cycle as well as trap sediment and filter coastal water. These process are vital to the local ecosystem. The tropical seagrass (Halodule uninervis) is also found in the Marine Park particularly around the ‘moat’.

Kelp is a form of subtidal microalgae that forms on the surface of mid water in temperate regions. Kelp plays its part as a form of habitat and is inhabited by a diverse range of marine animals and sea weeds. Kelp is a form of protect and foods source of many local animals and its existent is reliant on the existence of predators which ensure the impact of degradation based on herbivorous animals.

The Salt marsh that is found within the Cape Byron marine Park is the marine couch (Sporobolus virginicus var. minor) and the maritime rush (Juncus krausii).

Algae is also found in the Marine Park, and in particular Sargassum, the rare red algae (Rodriguezella), and the brown algae(Ecklonia radiata). 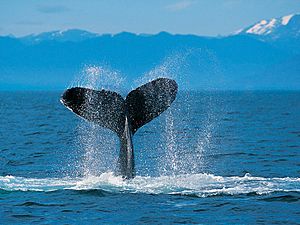 The Cape Byron Marine Park has more than 530 recorded fish species. However, there are several species which are in decline and or threatened which are protected under the Fisheries Management Act 1994. These include the Bleekers devil fish (Paraplesiops bleekeri), estuary cod (Epinephelus coioides), threatened black cod (Epinephelus daemelii) and the giant Queensland groper (Epinephelus lanceolatus). The spotted wobbegong (Orectolobus maculatus) and banded wobbegong (Orectolobus ornatus) have been recorded to be in decline while the great white shark (Carcharhinus carcharias) has been listed as vulnerable under the Fisheries Management Act 1994. The Grey nurse shark (Carcharius taurus) has also been listed under the Fisheries Management Act 1994 (NSW DPI 1994) as an endangered species and defined by the Environment Protection and Biodiversity Act 1999 as critically endangered with fears that there are less than 500 remaining in NSW waters.

Three of the sea turtles that live within the Cape Byron Marine Park which are considered threatened under the Species Conservation Act 1995 are the loggerhead turtle (Caretta caretta) which is defined as endangered and the Green turtle (Chelonia mydas) and the leatherback turtle (Dermochelys coriacea) which are both defined as vulnerable. These turtles are also considered threatened under the Environment Protection and Biodiversity Conservation Act 1999 along with the Hawksbill turtle (Eretmochelys imbricate) and the flatback turtle (Natator depressus).

Although no invertebrates have been identified as endangered or vulnerable, it is important to acknowledge that there are a plethora of invertebrates within the Cape Byron Marine Park which are critical to the health of the local ecosystems. These include a variety of molluscs such as the gold ring cowries (Cypraea annulus), Crustaceans such as the Zebra Shrimp (Ganthophylum americanum) and a specimen of the seven armed sea star (Luidia australiae). These Invertebrates have been noted as they are not usually found in areas and climates such as the Cape Byron Marine Park. The Zebra Shrimp and the seven armed sea star are rarely found in intertidal habitats and the gold ring cowries share a tropical affinity and demonstrate a rare occurrence in which the Cape Byron Marine Park is a habitat for both temperate and tropical species.

There are several ongoing threats to the Cape Byron Marine Park and its biodiversity. These environmental threats and issues include tourism and recreational use, fishing, pollution, development, invasive species, disease and climate change. The current trend of ocean temperature increases impacts the local habitat conditions, species range, and the impact of the EAC. Tourism and recreational use of the Cape Byron Marine Park has impacted on the populations of Grey Nurse Sharks (Carcharias taurus). Grey nurse sharks maintain the same nursery breeding grounds which are often disturbed by tourism activities such as divers and often the use of shark repellent. Shark netting protected swimmers on beaches has also been linked to mortality of grey nurse sharks. Increased boat traffic, pollution and fishing equipment are also a threat to the humpback whale on their migratory journey.

The local sea turtle population including the green turtle and loggerhead turtle are currently at risk of Fibropapillomatosis and in particular a new corneal strand of the virus which has resulted in a declining population. The increased prevalence of this virus has been linked to environmental factors such spikes in seasonal water temperatures and harmful algae bloom. The rise of cyanobacteria in the Cape Byron marine Park is also linked with the increase of pollution. Coastal development around the Cape Byron Marine Park is a concern on the nesting areas of the migratory little tern. Little Terns are highly sensitive to human disturbance and a decrease in suitable habitat impacts on the population size due to a decrease in adequate roosting and breeding grounds. Little terns are also impacted by pollution as poor water quality is known to negatively affect their food intake capacity. Coastal developments have also been known to impact on the local saltmarsh and mangrove communities which are critical habitat for several species of marine life and birdlife.

Climate change is affecting the Cape Byron Marine Park in several ways. It is altering the species range shifts which can impact finely balanced ecosystems. Examples of this has been seen through the identification of several tropical species identified within the Cape Byron Marine Park. There is also direct link between the rising levels of c02 in the atmosphere, the oceans become warmer and the lowering of the oceans PH levels (acidification). An increase in acidification and warmer water leads to a decrease in Carbonates which are attributed to coral bleaching as mass bleaching occurs when seas temperatures have exceeded average temperatures by 1 degree for than several weeks. This will impact negatively on the rare back coral trees (Antipathes grandis) found within the Cape Byron Marine Park. Changes in water temperature that are associated with climate change are also expected to impacted on the life cycle of many species as evidenced by the loggerhead turtle (Caretta caretta) change in nesting patterns and times, this again could lead to an unbalanced ecosystem which could have detrimental effects on other species which rely on the loggerhead turtle for survival.

The NSW Marine Parks have been declared under the Marine Parks Act 1997 and are managed by NSW Department of Primary Industries staff. The Act aims to protect and conserve the biodiversity of the marine park whilst also allowing for sustainable resource use e.g. fishing, whilst also allowing for reaction and public use of the area. The Marine Parks Act created a Marine Parks Authority (the Authority) which has the responsibility for administering the Act, a statewide Marine Parks Advisory Council that provides advice to the Ministers responsible for marine parks on matters relevant to all marine parks, and local advisory committees that advise the Ministers on local marine park matters. The Act also provides for the preparation of zoning plans; establishment of closures; assessment of development activities, both within and affecting marine parks; and preparation of operational plans. The Cape Byron Marine Park is divided into separate zones such as the; sanctuary zones, habitat protection zones, general use zones, and special purpose zones and they are managed accordingly.

Aside from the Marine Parks Act 1997, the Cape Byron Marine Park is also affected by the Environment protection and Biodiversity Act 1999, NSW Threatened species conservation Act 1995, National Parks and wildlife Act 1974. These Acts impact on the area as they cover several species that are protected under these acts such as the grey nurse shark. The Cape Byron Marine Park is impacted by a range of programs, including those operating within the park including: fisheries management, pollution reduction, estuary and coastal management. There are also programs on a national level that affect the marine park such as catchment management, national park management and land-use planning associated with the marine park. The Marine Parks Authority has a role in influencing the programs and initiatives that it is not directly responsible for and attempting to work in collaboration in order to achieve common goals. The Marine Park Authority works with other Governmental departments including Department of Planning, local government and with the Australian Department of the Environment, Water, Heritage and the Arts.

All content from Kiddle encyclopedia articles (including the article images and facts) can be freely used under Attribution-ShareAlike license, unless stated otherwise. Cite this article:
Cape Byron Marine Park Facts for Kids. Kiddle Encyclopedia.