Capernwray Dive Centre is a large flooded former quarry, presently operated as an inland scuba diving site, near the village of Over Kellet, Lancashire, England.

Formerly a 22-acre limestone quarry, after the end of its commercial use it flooded and was later converted into a dive centre. 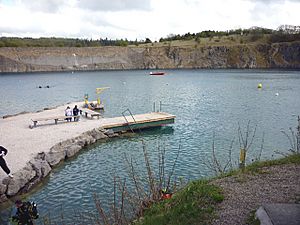 Used as a training centre, Capernwray has a range of depths to 80 feet (24 m). There is a small dive shop, with a filling station providing air and nitrox as well as a licensed restaurant. There are two sets of training platforms with levels at 2 metres (6 ft 7 in) and 6 metres (20 ft). As of 2010, the centre received around 30,000 visitors per year.

As well as being stocked with fish including trout, perch and at least two sturgeon, the underwater attractions include:

All content from Kiddle encyclopedia articles (including the article images and facts) can be freely used under Attribution-ShareAlike license, unless stated otherwise. Cite this article:
Capernwray Dive Centre Facts for Kids. Kiddle Encyclopedia.