Dismantled in 1937, the bridge was relocated to Capon Lake in southeastern Hampshire County to carry Capon Springs Road (County Route 16) between West Virginia Route 259 and Capon Springs. The bridge was dedicated on August 20, 1938. In 1991, a new bridge was completed to the south, and the Capon Lake Whipple Truss Bridge was preserved in place by the West Virginia Division of Highways, due to its rarity, age, and engineering significance. The Capon Lake Whipple Truss Bridge was listed on the National Register of Historic Places on December 15, 2011.

The Capon Lake Whipple Truss Bridge is located in a predominantly rural agricultural and forested area of southeastern Hampshire County within the Cacapon River valley. Baker Mountain, a forested narrow anticlinal mountain ridge, rises to the immediate west, and the western rolling foothills of the anticlinal Great North Mountain rise to the bridge's east. The confluence of Capon Springs Run with the Cacapon River lies just north (downstream) of the bridge. George Washington National Forest is located to the bridge's southeast, covering the forested area south of Capon Springs Road.

The bridge is located along Carpers Pike (West Virginia Route 259) in the unincorporated community of Capon Lake, 2.05 miles (3.30 km) southwest of Yellow Spring and 6.77 miles (10.90 km) northeast of the town of Wardensville. The historic Capon Springs Resort and the unincorporated community of Capon Springs are located 3.5 miles (5.6 km) east of Capon Lake on Capon Springs Road (West Virginia Secondary Route 16). The bridge is located immediately north (downstream) of the intersection of Carpers Pike with Capon Springs Road, which is carried across the Cacapon River via the current Capon Lake Bridge, a Girder bridge built in 1991 to replace the Whipple truss bridge for conveying vehicle traffic. The property containing the Capon Lake Whipple Truss Bridge is less than 1 acre (0.40 ha) in size. 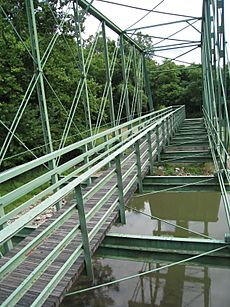 Wooden pedestrian walkway added to the bridge in 1991

The Capon Lake Whipple Truss Bridge is an early example of the use of metal truss bridge load-bearing superstructure technology, which defined highway bridge design well into the 20th century. Because of "its uncommon innovative design and age", the bridge is one of West Virginia's most historically significant bridges. It is the oldest remaining example of a Whipple truss bridge in West Virginia, and the oldest extant metal truss bridge in the state. The metal truss technology of the bridge displays distinctive innovations developed by the prominent civil engineers and bridge designers Squire Whipple and J. W. Murphy; the innovations are evident in the bridge's double-intersection diagonals and counter-diagonals with pin connections.

Approximately 20 feet (6.1 m) in width and 176 feet (54 m) in length, the bridge is built atop a reinforced concrete abutment and pier. Its truss structure exhibits a double-intersection configuration, constructed of 14 bays, each measuring approximately 11 feet (3.4 m) wide and 23 feet (7.0 m) in height, with the diagonals extending across two bays each. The bridge is fabricated of wrought iron bracketed with pins. Spanning the full length of the bridge is a wooden pedestrian walkway that consists of an observation deck and wooden seating near the bridge's midspan.

The bridge's Whipple truss technology was developed in 1847 by civil engineer Squire Whipple, who received a patent from the U.S. Patent Office the same year. Whipple was one of the first structural engineers to use scientific and mathematical methods analyzing the forces and stresses in framed structures to design the bridge, and his groundbreaking 1847 book, A Work on Bridge Building, had a significant influence on bridge engineering. Whipple's truss bridge design incorporated double-intersection diagonals into the standard Pratt truss, thus allowing the diagonals to extend across two truss bays. Engineer J. W. Murphy further modified Whipple's truss design in 1859 when he designed the first truss bridge with pinned eyebar connections, which utilized pins instead of trunnions. Murphy's design removed the need for riveted connections and allowed for easier and more widespread construction of truss bridges. In 1863, Murphy designed the first pin-connected truss bridge with both wrought iron tension and compression components and cast iron joint blocks and pedestals. Murphy's truss design consisted of double-intersection counter-diagonals, and along with the eyebar and pin connections, permitted longer iron bridge spans. 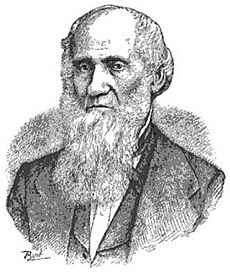 The technological design advances made by Whipple and Murphy, in addition to further advances in steel and iron fabrication, made wrought iron truss bridges a major industry in the United States. The Capon Lake bridge was a Whipple–Murphy truss bridge, since it incorporated Murphy's later modifications with double-intersections and horizontal chords. At the time of the bridge's original fabrication in 1874, metal truss bridges were ordered from catalogs by county courts and other entities responsible for transportation construction and maintenance. These entities provided the desired width, length, and other specifications, and the truss materials were shipped to the construction site and assembled by local construction teams. Metal truss bridges were more economically feasible, could span longer distances, and were simpler to construct than stone bridges, and they were more durable than wooden bridges. They were also marketed as detachable and transportable structures that could be dismantled and reassembled. The technology used in the Capon Lake Whipple Truss Bridge revolutionized transport throughout West Virginia. While the Whipple truss bridge had waned in popularity by the 1890s, the bridges were commonly disassembled and re-erected for use on secondary roads, as was the case with the Capon Lake Whipple Truss Bridge in 1938.

T. B. White and Sons

The construction company that built the Capon Lake Whipple Truss Bridge, T. B. White and Sons, was established in 1868. Its founder Timothy B. White had been a carpenter and contractor in New Brighton, Pennsylvania since the 1840s. White also operated factories for iron cars and woolen mill machinery until 1859, when he began to concentrate solely on bridge construction. White's bridge company operated from a factory on the Beaver River in New Brighton until the factory was destroyed by fire in 1878. After the fire, the company relocated across the river to Beaver Falls and restructured as the Penn Bridge and Machine Works. In addition to iron truss bridges, the company produced a range of structural and architectural components and continued to expand; it employed over 500 workers by 1908. Penn Bridge and Machine Works fended off purchase by the American Bridge Company and continued to operate independently, unlike similar small bridge companies founded in the 19th century. The most prolific of its kind in the Pittsburgh region, the company was responsible for the construction of bridges throughout the United States. 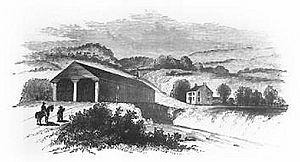 The 1838 covered bridge over the South Branch Potomac River destroyed during the American Civil War, looking east toward Sycamore Dale

The Capon Lake Whipple Truss Bridge was originally constructed in 1874 as part of the South Branch Bridge (or the Romney Bridge), a larger two-span Whipple truss bridge conveying the Northwestern Turnpike (U.S. Route 50) across the South Branch Potomac River 0.57 miles (0.92 km) west of Romney. The 1874 Whipple truss bridge across the South Branch replaced an 1838 wooden covered bridge that had been chartered by the Virginia General Assembly during the construction of the Northwestern Turnpike. Before the construction of the covered bridge in 1838, a public ferry conveyed traffic across the river. Isaac Parsons (1752–1796) operated a ferry there following its establishment by an act of the Virginia General Assembly in October 1786. The 1838 covered bridge remained in use until it was destroyed by retreating Confederate forces during the American Civil War. Throughout the course of the war, Romney reportedly changed hands 56 times between Confederate and Union forces, and the crossing of the South Branch Potomac River served as a strategic point due to its position along the Northwestern Turnpike, an important east–west route. 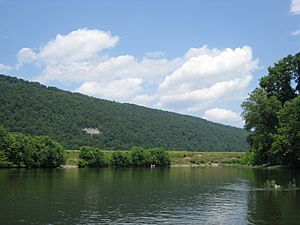 The South Branch Intelligencer published periodic updates on the progress of the South Branch Bridge's construction. According to the newspaper, the bridge was scheduled to be completed by July 1875. During the course of construction, John Ridenour lost a finger while working on the bridge. The new South Branch Bridge was completed well ahead of schedule in October 1874. The October 12, 1874, edition of the South Branch Intelligencer characterized the new bridge as a "complete, handsome and durable structure", and further recounted that "the contractors, Messrs. White & Sons, New Brighton, Pennsylvania 'Penn Bridge & Machine Works,' have given us, in general opinion, a first rate, durable work, and deserve our best commendations.... We are confident that ours will realize a very handsome income and fully vindicate the wisdom of the County Court in voting its construction."

Following its construction in 1874, the Whipple truss bridge over the South Branch Potomac River served Romney and travelers along the Northwestern Turnpike for 63 years. In 1935, the West Virginia State Road Commission began organizing a project to replace the Whipple truss bridge, and construction of the new bridge had begun by 1936. In November of that year, a car collided with the south side of the eastern Whipple truss span, which knocked the span completely off its eastern abutment. The car plunged into the South Branch Potomac River, followed by the compromised truss span, which collapsed on top of the car. Unaware of the span's collapse, a car traveling from the west drove off the end of the west span at the bridge's center pier, and fell onto the collapsed span. According to the Hampshire Review, the only serious injury sustained was a broken wooden leg. Following the collapse of the eastern Whipple truss span, a temporary wooden span was hastily constructed between the western truss span and the eastern abutment, so that traffic was uninterrupted until the new bridge was completed and opened on June 21, 1937. The 1937 bridge was used until 2010 when it was replaced by the current South Branch Bridge. 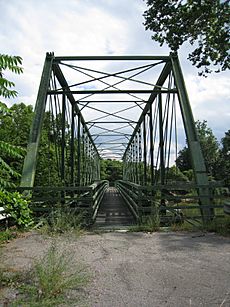 Because Whipple truss bridges were easily disassembled and re-erected, the remaining western span of the Whipple truss over the South Branch was dismantled in 1937 and relocated to Capon Lake in southeastern Hampshire County to convey Capon Springs Road (West Virginia Secondary Route 16) between West Virginia Route 259 and Capon Springs. According to Branson Himelwright, a Capon Springs resident who had been a construction worker involved in the re-erection of the Whipple truss span at Capon Lake, the only two ways to cross the Cacapon River to reach Capon Springs were to cross a swinging footbridge or ford the river. During the bridge's construction, a new pier and abutments were constructed to carry the Whipple truss span and a connected Pratt truss that had been salvaged from an unknown bridge. Himelwright and Jacob "Moss" Rudolph, who had also participated in the bridge's construction, stated in interviews that both the site excavation and concrete work for the pier and abutments were completed by hand.

In 1991, the new steel stringer Capon Lake Bridge was constructed 187 feet (57 m) to the southwest of the Capon Lake Whipple Truss Bridge, after which the Whipple truss bridge was closed to vehicle traffic. Due to its rarity, age, and engineering significance, West Virginia Division of Highways District 5 decided to preserve the Whipple truss bridge. During the bridge's restoration, the Pratt truss span was removed due to significant deterioration, and the roadway deck was also removed. A wooden pedestrian walkway and observation deck were constructed across the full span of the remaining truss bridge.

Cacapon River, looking downstream from the bridge in 2009

First erected in 1874 as a two span bridge on US 50 near Romney, one span was moved here in 1938 and re-erected on a new foundation. The 17' wide by 176' long bridge is a Whipple–Murphy Truss. The state's oldest extant metal truss, the bridge is one of a few of its type in WV. Listed in the National Register of Historic Places in 2011.

All content from Kiddle encyclopedia articles (including the article images and facts) can be freely used under Attribution-ShareAlike license, unless stated otherwise. Cite this article:
Capon Lake Whipple Truss Bridge Facts for Kids. Kiddle Encyclopedia.