The Capri Theatre is a heritage-listed cinema in Goodwood, a suburb of Adelaide, South Australia, built in the Art Deco style in 1941. It was formerly called the Goodwood Star, New Curzon, and Cinema Capri.

It is owned by and is home to the Theatre Organ Society of Australia (SA Division). A notable feature of the cinema is the Wurlitzer theatre organ, which is used regularly for recitals, as well as an entertainment feature supporting the screening of films. 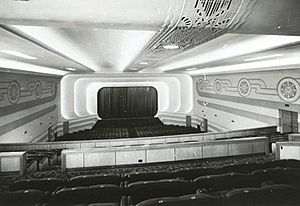 The cinema was designed by renowned Art Deco architect Christopher Arthur Smith. It was built by R.J. Nurse of Norwood, and the interior decoration was by a Mrs B.A. Gordon. The original plans show the name "Savoy", but it was initially named the Goodwood Star.

The cinema opened on 8 October 1941 as the New Star Theatre, replacing the existing 1920-built Star Theatre which still stands, two doors southwards. It was part of the Clifford Theatre Circuit and had a seating capacity of 1,472 persons. The films shown on opening night were Robert Young in Florian and Lew Ayres in Dr. Kildare Goes Home.

Greater Union acquired the cinema 1947, as part of their acquisition of the Clifford Circuit.

The cinema was renamed as the New Curzon on 21 February 1964, then again as the Cinema Capri on 16 November 1967, when Greater Union took out most of the Art Deco interior decorative features and reduced the seating capacity to 851.

The Theatre Organ Society of Australia (South Australian Division) Inc. purchased the cinema in 1978, and they relaunched the cinema as the Capri Theatre. Many of the interior features have been retained and restored since then, with an appeal launched by the National Trust of Australia to repaint the exterior for the theatre's 75th anniversary in 2016.

Installation of the "Mighty Wurlitzer"

The Theatre Organ Society (TOSA) installed a Wurlitzer theatre organ, after altering the proscenium arch to allow for it, with the pipe work in glass fronted chambers along each side of the screen. The inaugural concert took place on 2 April 1983.

The organ had been built in Sydney, before being moved to Darwin for some years, finally being moved to Adelaide by TOSA not long before Cyclone Tracy devastated the house it had been kept in.

As originally installed, the organ had four keyboards and 13 sets of pipes (ranks). These were added to, until as of 2020[update] it has 29 ranks, making it the second largest in the Southern Hemisphere. The pipework has been progressively installed in glass-fronted chambers, unique in a theatre or cinema.

On 27 September 1990 the cinema was placed on the South Australian Heritage Register.

While the cinema has modern presentation features, its appearance has been carefully restored to its 1941 Art Deco design, including:

The cinema is a single-screen cinema, with 750 seats on two levels. It is available for hire, specialising in fund-raising events, and is used as a venue for Adelaide Fringe events.

The cinema had a new digital projection system installed in 2012, with the assistance of the South Australian Government and Unley Council. Upstairs, it features lounge seats, including double "love seats".

The cinema is run as a not-for-profit organisation, run mostly by volunteers and with all profits spent on the upkeep of the building and its famous organ.

The cinema operates mainstream cinema programming. Several times a year, it presents "Nostalgia Movie Nights", when popular classic films are shown, in a programme with supporting short films, a newsreel and nostalgic advertising. Another regular event is the "Cult at the Capri", when two films are shown.

The Wurlitzer is played before sessions on Tuesday, Friday and Saturday evenings, is also used for regular organ concerts, featuring local and international organists.

All content from Kiddle encyclopedia articles (including the article images and facts) can be freely used under Attribution-ShareAlike license, unless stated otherwise. Cite this article:
Capri Theatre Facts for Kids. Kiddle Encyclopedia.