Captain Video and His Video Rangers facts for kids

Captain Video and His Video Rangers is an American science fiction television series that aired on the DuMont Television Network and was the first series of its genre on American television.

Researcher Alan Morton estimates there were a total of 1,537 episodes (counting the 20 Saturday morning episodes), although few of them exist after the destruction of the original broadcasts, which was commonplace at that time. Sponsors included Post Cereals, Skippy Peanut Butter, DuMont-brand television sets, and Power House candy bars. Premiums sold via the show included a flying saucer ring, a "secret seal" ring, cast photos, electronic goggles, a "secret ray gun", a rocket ship key chain, decoders, membership cards, and a set of 12 plastic spacemen.

The long-running series, set in Earth's distant future, tracked the adventures of a group of fighters for truth and justice, known as The Video Rangers. They were led by Captain Video (no first name ever was mentioned). The Video Rangers operated from a secret base on a mountaintop whose location was unspecified. Their uniforms resembled U.S. Army surplus with lightning bolts sewn on. Captain Video had a teenage companion known only as The Video Ranger. The Captain received his orders from "The Commissioner of Public Safety" (surname Carey), whose responsibilities took in the entire solar system as well as human colonies on planets around other stars.

Captain Video was the first adventure hero explicitly designed by DuMont's "idea man" Larry Menkin for early live television. One of its most iconic episodes, widely written about in metropolitan New York newspapers, was titled "I TOBOR". The robot was an important recurring character, and represented the first appearance of a robot in live televised science fiction. Its original manufacturer's name was "ROBOT I", but the stencil with its name inadvertently was applied backward, thus creating the enigmatic name. The robot was played by actor David Ballard, who stood 7 feet, 6 inches tall.

Other villains included Doctor Pauli, the "wily Oriental" Hing Foo Sung, and Nargola, played by neophyte actor Ernest Borgnine before he went on to become a major stage and Oscar-winning (Marty) film actor. Researcher Don Glut estimated that, in all, about 300 villains appeared on the show at one time or another. 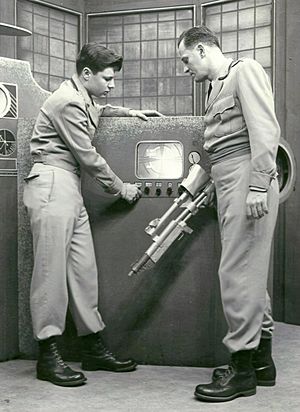 Captain Video was broadcast live five to six days a week, and was popular with children and adults. It earned a special mention in the first episode, "TV or Not TV", of the phenomenally popular Jackie Gleason sitcom series The Honeymooners in which the character Ed Norton wore a space helmet while watching the show.

Because of the large adult audience, the usual network broadcast time of the daily Captain Video series was 7 to 7:30 p.m. EST, leading off the "prime evening" time block and giving parents a chance to get home from work before the show began. For its last two seasons, the show still aired at 7 p.m. ET, but was reduced to 15-minute segments.

Despite its popularity, throughout its run the production was hampered by a very low budget. Until 1953, Captain Video's live adventures occupied only 20 minutes of each day's 30-minute program time. To fill out the rest and save money, about 10 minutes into each episode a "Video Ranger communications officer" popped in to show about seven minutes of old cowboy movies described by the otherwise-extraneous officer "Ranger Rogers" as the adventures of Captain Video's "undercover agents" on Earth. No explanation ever was offered to viewers as to why these paddings were used.

In reality, the reason was that the Westerns originally had been purchased by the DuMont channel/network to be shown in their entirety, and hosted by Captain Video, but the format was flip-flopped to become a show about Captain Video occasionally interrupted by clips from the old Westerns. Despite the incongruity of mixing the two genres, it was done so the cash-strapped channel would not waste the money spent acquiring the broadcast rights to the Westerns.

A spinoff series, The Secret Files of Captain Video, aired on Saturdays from September 5, 1953, to May 29, 1954, alternating with Tom Corbett, Space Cadet. Each of the 20 half-hour episodes told a complete story.

Jim Caddigan, DuMont program director, reportedly came up with the series after watching the Captain Marvel movie serial, and told his writers to come up with a Captain Marvel-type character of their own. The stories originally were Earth-bound, mostly taking place in Captain Video's headquarters due to budgetary restrictions. However, when the Buck Rogers TV show was announced by ABC, DuMont moved Captain Video's adventures out into space to compete. Little did they know the Buck Rogers show would be cancelled within a few months.

In early episodes, Captain Video's opponent was Doctor Pauli (played by Hal Conklin, a writer-actor best known for making dozens of short films in the 1920s and '30s). The Doctor Pauli character was an inventor who wore gangster-style pinstriped suits, and spoke with the snarl of a movie Nazi or Soviet. Like the last few theatrical serials, the television series' plots often involved inventions created by Captain Video or the evil genius, but obviously made from hardware store odds-and-ends with much double-talk regarding their fantastic properties.

The series originally was broadcast from a studio in a building occupied by the New York branch of the famous Philadelphia department store Wanamaker's, and the production crew simply would go downstairs for props, often just a few minutes before airtime. Originally, only three Rangers were seen on camera – The Video Ranger, Ranger Rogers the communications officer, and Ranger Gallagher. (They also were the only Rangers seen in the 1951 film serial version of the series.) As the budget increased, a larger roster of Rangers briefly was seen on TV. According to Variety, the female lead was played by Norma Lee Clark.

Captain Video eventually had the use of three spaceships. In the first ship, the X-9 (later replaced briefly by the X-10), the crew at takeoff lay upon tilted bunk beds on their elbows, a posture based upon space travel theories of the time. Later, the V-2 rocket-like ship named "Galaxy" had an aircraft-style cockpit with reclining seats. The Captain's final spacecraft, after early 1953, was the "Galaxy II".

The other space adventure series of the period were Tom Corbett, Space Cadet (initially CBS, then ABC, then DuMont), also broadcast live from New York City, and Space Patrol (ABC), broadcast live from Los Angeles. There were some plot similarities among the three. At times, for example, Space Patrol seemed to be doing a West Coast recreation of Captain Video's latest adventure.

Al Hodge, who had portrayed the role of Britt Reid, the Green Hornet, on radio, is the Captain Video most original viewers of the series remember (1950–1955) even though the original Captain Video was played by Richard Coogan, who played the role for 17 months. Conversely, The Video Ranger was played during the entire run of the show by teenaged Don Hastings, who later became a longtime soap opera star on As the World Turns.

During commercial breaks, DuMont aired special "Video Ranger messages". They ranged from public service spots on morality and civics to advertisements for Video Ranger merchandise. These messages consisted of a still title card reading "VIDEO RANGER Message" with the announcer reading the message in a voice-over, allowing sets to be reconfigured for the next scene while the message was read.

Many premiums were offered by sponsors of the show, including space helmets – which received a boost when, as aforementioned, actor Art Carney's Ed Norton character wore one on an episode of The Honeymooners, secret code guns, flying saucer rings, decoder badges, photo-printing rings, and Viking rockets complete with launchers. A clip of in-show advertising can be seen on YouTube. 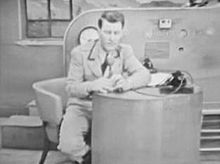 A screen shot of Captain Video in progress

24 episodes of the series are held by the UCLA Film and Television Archive and are believed to be the only remaining episodes from the series. Of these surviving episodes, only five 30-minute episodes, three featuring Richard Coogan and two featuring Al Hodge, have been available to the public on home video. The other 19 are only available at the archive's facilities by appointment.

DuMont's film archive, consisting of kinescope (16 mm) and Electronicam (35 mm), was discarded in the 1970s by Metromedia, the broadcast conglomerate that was the successor company to DuMont; according to Congressional testimony, these films were discarded somewhere between Upper New York Bay and the East River. To date, the person or persons responsible for ordering the destruction of the kinescopes and other recordings remains unknown.

Columbia Pictures made a movie serial, starring Judd Holdren, under the name Captain Video: Master of the Stratosphere (1951). However, it displayed only marginally better sets and props than its TV inspiration. Some special effects were accomplished with cel animation, inspired by earlier use in another, successful serial from the same studio, Superman (1948). Columbia's movie serial was the only time a serial was based on a television program. Tom Corbett and Space Patrol were also heard on the ABC Radio Network. However, since DuMont had no affiliated radio network, DuMont never provided a radio version of Captain Video's adventures.

Six issues of a Captain Video comic book were published by Fawcett Comics in 1951. The rival space adventure programs Tom Corbett and Space Patrol shortly thereafter had their own comic books as well. Some of these comics were used as the basis for a British TV Annual, a hardcover collection produced in time for Christmas, which also made the claim that man would venture into space in 1970 and would reach the moon by 2000.

All content from Kiddle encyclopedia articles (including the article images and facts) can be freely used under Attribution-ShareAlike license, unless stated otherwise. Cite this article:
Captain Video and His Video Rangers Facts for Kids. Kiddle Encyclopedia.