The Caravan and Motorhome Club is an organisation representing caravan and motorhome users in the United Kingdom and Ireland. It was founded in 1907 and now represents nearly one million members (caravanners, motorhomers and campervanners).

The Club was founded in 1907 as The Caravan Club of Great Britain and Ireland. Its aim was to "... bring together those interested in van life as a pastime...to improve and supply suitable vans and other appliances...to develop the pastime by collecting, publishing and supplying to members, books and periodicals and lists of camp sites etc... to arrange camping grounds...".

The Club was renamed as The Caravan Club in 1959 and celebrated its centenary on 14 June 2007. The club's current name, the Caravan and Motorhome Club was adopted in February 2017.

The Club is a member of the Fédération Internationale de l'Automobile (FIA), an organisation that represents the interests of motoring organisations and motor car users.

The Club has over 900 staff and an annual turnover of over £100 million.

The Caravan and Motorhome Club represents nearly one million tourers. 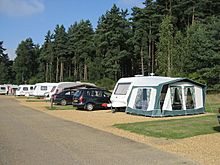 The Caravan And Motorhome Club site, the Sandringham estate

Most CLs are in the countryside, they are individually owned and can be on a farm or smallholding, on spare land next to a pub, golf course or hotel or on land attached to the owner's house. CLs need no site licence or formal planning permission, but are covered by two Acts of Parliament:

The laws state that visitors with caravans must be members of The Caravan And Motorhome Club, who are required to act responsibly and to observe the Country Code and no more than 5 caravans may be accommodated on the site at any one time. Caravans may not stay for more than 28 days per visit and must be occupied overnight. CLs are for recreational purposes and only touring caravans, motor caravans or trailer tents are permitted – tents are not permitted, other than attached caravan awnings, toilet tents or small pup tents; and permanently sited (static) caravans are not permitted on the same landholding.

There are also a number of guidelines stated. For example, CLs should be fairly level and have at least ½ acre of land; and have safe access for caravans including 12 ft wide gateway and safe approach road. If the landowner has a caravan site licence from their Local Authority, the Caravan And Motorhome Club is unlikely to issue a Certificate, unless the CL is entirely separate from the landowner's other business activities.

To become a CL, owners should provide an emptying point for chemical closets; a safe drinking water supply; A bin for dry rubbish; and public liability insurance cover. Some owners provide optional extras such as electrical hook ups, showers and toilets. Although exempt from planning permission, CL owners are liable to pay business rates and income tax on their profits.

Each year, the club holds a "National Rally" over the Spring Bank holiday at the end of May. The rally usually taking place in the grounds of a stately home and can attract up to 10,000 caravanners at a time.

The club offers a variety of other services with the intention of supporting and improving the lifestyle and holidays of its members. They offer a variety of insurance products including caravan, motorhome, car, breakdown, holiday, home and pet coverage.

They also provide overseas ferry and pitch bookings for members looking to holiday overseas, as well as an extensive range of technical advice.

The club is also active in lobbying on behalf of its members.

The Caravan Club has developed alliances with a number of groups:

All content from Kiddle encyclopedia articles (including the article images and facts) can be freely used under Attribution-ShareAlike license, unless stated otherwise. Cite this article:
Caravan and Motorhome Club Facts for Kids. Kiddle Encyclopedia.