Kids Encyclopedia Facts
Not to be confused with Canyon, California.

Carbon Canyon Dam (or Carbon Creek Dam) is a dam at the northern edge of Orange County, California. The dam is approximately 4 miles (6.4 km) east of the city of Brea and approximately 12 miles (19 km) north of the city of Santa Ana. The drainage area above the dam is 19.3 square miles (50 km2) and is encompassed entirely within the Puente and Chino Hills. The Carbon Canyon Creek flows in a generally southwesterly direction onto the coastal Orange County Plain, joins Coyote Creek, and then flows into the San Gabriel River. 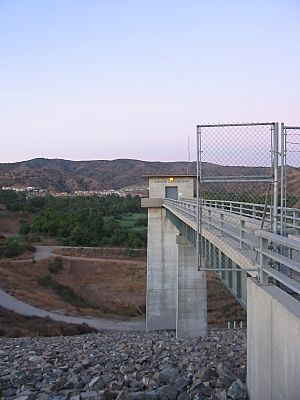 The Carbon Canyon Dam and Channel was authorized pursuant to two acts of Congress. The first of these, the Flood Control Act of 1936 (Public Law 738, 74th Congress, H.R. 8455, approved 22 June 1936), provided in part for the construction of reservoirs and related flood-control works for the protection of metropolitan Orange County, California. The second (Public Law 761, 75th Congress, approved 28 June 1938), amended the 1936 Act by providing for the acquisition by the United States of land, easements, and right-of-way for dam and reservoir projects, channel improvements, and channel rectification for flood control. The overall project was adopted in the Flood Control Act of 1936 on the basis of the 29 July 1935 report of the Orange County Flood Control District (OCFCD) in connection with an application for a grant under the Federal Emergency Relief Appropriation Act of 1935. 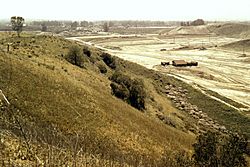 Information generally pertaining to the dam was first presented in the OCFCD report mentioned above. In numerous subsequent conferences with LAD, the Orange County Board of Supervisors and OCFCD discussed the plan of improvement. A comprehensive report on a plan for flood control in Orange County, California, was prepared by OCFCD in March 1955. This plan included Carbon Canyon Dam and Carbon Canyon Creek channel improvements. Design of the dam, and a length of improved channel immediately downstream of the dam, was performed by LAD, and presented in "General Design for Carbon Canyon Dam and Channel, Design Memorandum No. 2, Santa Ana River Basin (and Orange County)", dated August 1957, submitted 21 February 1958, and approved with comments 17 April 1958. This memorandum included design of the dam, outlet works, spillway, and a concrete-lined channel 4,080 feet (1,240 m) in length (see para. 3-04a), as well as construction of drainage structures, relocation of two highways, modification of bridges, the removal of school buildings and residences, and the relocation of utilities.

The desilting basin has two weirs which serve different purposes. The lowlevel weir at the south end of the basin acts to restrict and divert flows to the Santa Ana River via the Carbon Canyon Diversion Channel. This weir has a capacity of about 3200 ft3/s. There is also a weir at the west end of the desilting basin at a higher elevation above which flows enter Miller Retarding Basin. The capacity of this weir is about 6000 ft3/s. There is also an emergency spillway at the west and which empties into a ditch. This ditch eventually leads back into Carbon Creek, which flows toward Coyote Creek. Thus inflow to Miller Basin may be, when necessary or desired, split between the Carbon Canyon Diversion Channel and Carbon Creek Channel, and passed into the lower Santa Ana or San Gabriel Rivers, respectively.

The plan for controlling floods on the Carbon Canyon Creek below Carbon Canyon Dam is presented in this section. The objective of the water control plan is to maximize flood control benefits. Project releases will be regulated to protect downstream communities and to avoid spillway flow. Although releases from Carbon Canyon Dam could affect downstream discharges in Coyote Creek and the Santa Ana River, the dam is not usually regulated as part of these systems. Release rates from the dam are not to exceed the downstream capacity of Carbon Canyon Channel between the outlet works and Golden Avenue.

All content from Kiddle encyclopedia articles (including the article images and facts) can be freely used under Attribution-ShareAlike license, unless stated otherwise. Cite this article:
Carbon Canyon Dam Facts for Kids. Kiddle Encyclopedia.