Cardiff-by-the-Sea, usually referred to as Cardiff, is a beach community located in Encinitas, bordering Solana Beach to the south in San Diego County, California. The Pacific Ocean is to the west of Cardiff, Encinitas on its east and north, and a beach and lagoon on its south. With a population of under 12,000, Cardiff-by-the-Sea operates as part of the city of Encinitas, but unlike the other communities that comprise Encinitas, has its own ZIP code (92007).

In 1911, this former farming community began to develop Cardiff, when Boston developer J. Frank Cullen broke ground to build new homes. Frank Cullen's wife, a native of Cardiff, Wales, persuaded him to name the community "Cardiff", as well as many streets, such as "Birmingham", "Oxford", "Chesterfield" and "Manchester", despite heavy Spanish influence in the area.

Cardiff is also home to a few well-known surf spots, such as Swami's and Cardiff Reef.

Cardiff has a school district consisting of two schools:

Cardiff Reef ("The Reef") is a popular surf spot in Cardiff that produces waves both professional and novice surfers enjoy year round. Surfing at The Reef has progressed from just a few surfers in the 1950s to become one of the most popular surfing spots in San Diego County. Cardiff Reef and nearby surf spot, Pipes, are famous for their smooth and consistent wave shape.

When the tide is low, a flat rock reef is revealed that extends 50 yards from shore. Exploring these tide pools is a popular activity for visitors of Cardiff. 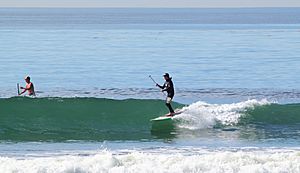 All content from Kiddle encyclopedia articles (including the article images and facts) can be freely used under Attribution-ShareAlike license, unless stated otherwise. Cite this article:
Cardiff-by-the-Sea, Encinitas, California Facts for Kids. Kiddle Encyclopedia.