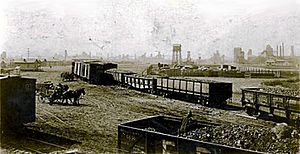 View of Cardin mines, plant, and railyard in 1922 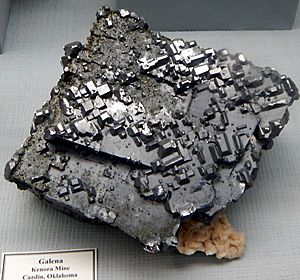 Fine Galena specimen from the old Kenora mine, Cardin

A former center of zinc and lead mining in northeastern Oklahoma, the town is located within the Tar Creek Superfund site designated in 1983 because of extensive environmental contamination. The vast majority of its residents accepted federal buyout offers of their properties, and the town's population dropped to zero in November 2010.

The town of Cardin was originally known as Tar Creek, when it was founded as a mining town in 1913. In 1918, William Oscar Cardin, a member of the Quapaw tribe, and his wife, Isa Wade Cardin, had his 40-acre allotment platted and recorded with the county clerk. The town name changed from Tar Creek to Cardin in 1920. There were 2,640 residents in 1920.

The town, along with Picher, and Hockerville, is located within the Tar Creek Superfund site. These towns are part of a $60 million federal buyout because of lead pollution, as well as risk of buildings caving in due to decades of mining. Cardin, Oklahoma, officially closed its last business, the post office, on February 28, 2009. In April 2009, federal officials stated that only seven residences were occupied in Cardin, and that the town's water service would soon be shut off. This made Cardin the first city within the area to be completely closed down. In November 2010, the last family in Cardin received its final buyout payment from the federally funded Lead-Impacted Communities Relocation Assistance Trust and departed, reducing the town's population to zero.

There were 58 households, of which 29.3% had children under the age of 18 living with them, 60.3% were married couples living together, 13.8% had a female householder with no husband present, and 24.1% were non-families. 20.7% of all households were made up of individuals, and 12.1% had someone living alone who was 65 years of age or older. The average household size was 2.59 and the average family size was 3.00.

The local school district, Picher-Cardin Public Schools, closed in 2009. The territory at that time became a part of Quapaw Public Schools.

All content from Kiddle encyclopedia articles (including the article images and facts) can be freely used under Attribution-ShareAlike license, unless stated otherwise. Cite this article:
Cardin, Oklahoma Facts for Kids. Kiddle Encyclopedia.