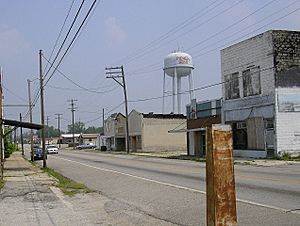 A view looking north along Connell Ave, which was the main business district, 2007. The Picher Water Tower stands in the background. 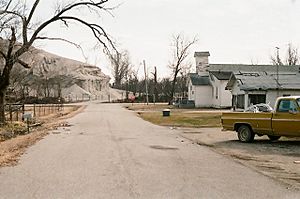 The mining waste was located very near neighborhoods in the town, 2008

Picher is a ghost town and former city in Ottawa County, Oklahoma, United States. This was a major national center of lead and zinc mining at the heart of the Tri-State Mining District.

More than a century of unrestricted subsurface excavation dangerously undermined most of Picher's town buildings and left giant piles of toxic metal-contaminated mine tailings (known as chat) heaped throughout the area. The discovery of the cave-in risks, groundwater contamination, and health effects associated with the chat piles and subsurface shafts resulted in the site being included in 1980 in the Tar Creek Superfund Site by the US Environmental Protection Agency. The state collaborated on mitigation and remediation measures, but a 1996 study found that 34% of the children in Picher suffered from lead poisoning due to these environmental effects, which could result in lifelong neurological problems. Eventually the EPA and the state of Oklahoma agreed to a mandatory evacuation and buyout of the entire township. The similarly contaminated satellite towns of Treece, Kansas and Cardin, Oklahoma were included in the Tar Creek Superfund site.

A 2006 Army Corps of Engineers study showed 86% of Picher's buildings (including the town school) were badly undermined and subject to collapse at any time. The destruction of 150 homes by an EF4 tornado in May 2008 accelerated the exodus. On September 1, 2009, the state of Oklahoma officially dis-incorporated the city of Picher, which ceased official operations on that day. The population plummeted from 1,640 at the 2000 census to 20 at the 2010 census. As of January 2011, only six homes and one business remain, their owners having refused to leave at any price. Except for some historic structures, the rest of the town's buildings were scheduled to be demolished by the end of the year. One of the last buildings, which had housed the former Picher mining museum was destroyed by arson in April 2015. Fortunately, its historical archives and artifacts had previously been shipped elsewhere.

Picher is among a small number of locations in the world (such as Gilman, Colorado; Centralia, Pennsylvania; and Wittenoom, Western Australia) to be evacuated and declared uninhabitable due to environmental and health damage caused by the mines the town once serviced.

The closest towns to Picher, other than nearby Cardin, Treece, and Douthat, are Commerce, Quapaw (the headquarters of the nation by that name), and Miami, Oklahoma.

In 1913, as the Tri-State district expanded, lead and zinc ore were discovered on Harry Crawfish's claim and mining began. A townsite developed overnight around the new workings and was named Picher in honor of O. S. Picher, owner of Picher Lead Company. The city was incorporated in 1918, and by 1920, Picher had a population of 9,726. Peak population occurred in 1926 with 14,252 residents and was followed by a gradual decline due to the decrease in mining activity, leaving Picher with only 2,553 by 1960.

The Picher area became the most productive lead-zinc mining field in the Tri-State district, producing over $20 billion worth of ore between 1917 and 1947. More than fifty percent of the lead and zinc metal used during World War I were produced by the Picher district. At its peak more than 14,000 miners worked the mines and another 4,000 worked in mining services. Many workers commuted by an extensive trolley system from as far away as Joplin and Carthage, Missouri. Mining ceased in 1967 and water pumping from the mines ceased. The contaminated water from some 14,000 abandoned mine shafts, 70 million tons of mine tailings, and 36 million tons of mill sand and sludge remained as a huge environmental cleanup problem. As a result of national legislation to identify and remediate such environmentally hazardous sites, in 1980 the area was designated as part of the Tar Creek Superfund site. 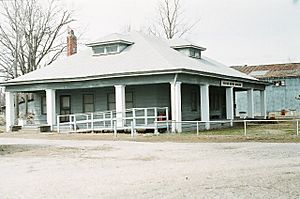 The former Tri State Zinc and Lead Ore Producers Association Office was on the National Register of Historic Places, 2008. The building was destroyed by arson in April 2015.

While some remediation took place in the following quarter century, contamination and other environmental hazards were found to be so severe that the government decided to close Picher and relocate its residents, as reported on April 24, 2006, by Reuters. Due in large part to the removal of large amounts of subsurface material during mining operations, many of the city's structures have been deemed in imminent danger of caving in.

The city's pharmacist, Gary Linderman, was featured in the May 28, 2007, issue of People magazine in the Heroes Among Us article: "Prescription for Kindness". He vowed to stay as long as there was anyone left who needed him and to be the last one out of the city. Linderman, the only remaining resident of Picher, died on June 6, 2015, at age 60 after a sudden illness.

On May 10, 2008, Picher was struck by an EF4 tornado. There were eight confirmed deaths, possibly including one child, and many other people injured. The tornado first touched down near the Kansas–Oklahoma border in Oklahoma southwest of Chetopa, Kansas, and tracked eastward. It struck Picher, causing extensive damage to 20 blocks of the city, with houses and businesses destroyed or flattened. The damage in Picher was rated at "EF4". At least 150 people were injured in Picher alone. The tornado continued eastward, passing just north of Quapaw and Peoria before crossing Interstate 44 into Missouri. Given the existing plan to vacate the city, the federal government decided against aid to rebuild homes, and the buyouts continued as previously scheduled, with people being assisted in relocation.

Oklahoma Governor Brad Henry sent National Guard troops as well as emergency personnel to assist the hardest hit area in Picher. Loss of power from the tornado forced the city to go on a boiled water notice. Staff from the Oklahoma Rural Water Association arrived to assist, since the utility's testing equipment was destroyed by the storm. With an emergency generator to supply power, rural water staff had the system running normally only two days after the tornado struck.

In April 2009, residents voted 55–6 to dissolve the Picher-Cardin school district; it graduated its final class of 11 in May. By 2009 the district's enrollment had dropped to a total of 49 students from approximately 340 three years prior. Remaining students were assigned to attend Commerce and Quapaw school districts. 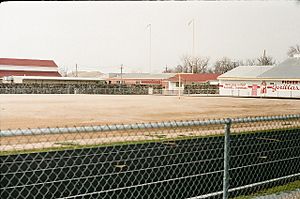 The city's post office was scheduled to close in July 2009, and the city ceased operations as a municipality on September 1, 2009. By June 29, 2009, all of the residents had been given federal checks to enable them to relocate from Picher permanently. The city is considered to be too toxic to be habitable. On the last day, all the final residents met at the school auditorium to say goodbye. As of November 2010, it was reported that Picher still had "one business and six occupied houses."

The government carried out a similar relocation program for residents of the adjacent city of Treece, Kansas On October 29, 2009, Congress voted to allow the EPA to fund the relocation of the remaining citizens of Treece.

Starting in January 2011, almost all remaining commercial structures were scheduled to be demolished. Gary Linderman, owner of the Old Miner's Pharmacy, said he would stay until the last resident left. By March 2014, standing abandoned buildings included the Picher-Cardin High School building, a Disciples of Christ church, the mining museum, and a handful of mercantile buildings, as well as numerous abandoned houses.

The municipality of Picher was officially dissolved on November 26, 2013.

The Picher Mining Field Museum, which had been housed in the former Tri-State Zinc and Lead Ore Producers Association building, was destroyed by arson in April 2015. The museum archives had previously been sent to Pittsburg State University, and other artifacts had been sent to the Baxter Springs, Kansas Heritage Center and Museum.

There were 621 households out of which 30.9% had children under the age of 18 living with them, 50.6% were married couples living together, 12.4% had a female householder with no husband present, and 32.7% were non-families. 29.1% of all households were made up of individuals and 14.0% had someone living alone who was 65 years of age or older. The average household size was 2.58 and the average family size was 3.20.

Picher was featured in the PBS Independent Lens film The Creek Runs Red, which discussed the connection of the people and their desire to leave or stay in the city. Picher was also featured in the Jump the Fence Productions film titled Tar Creek (2009). The film was written, directed, and narrated by Matt Myers.

Picher was featured in an episode of Life After People: The Series on the History Channel. The aforementioned tornado was also featured on an episode of the Weather Channel's Storm Stories.

Picher was also featured in the premiere episode of Forgotten Planet: Abandoned America on the Discovery Channel (along with Pripyat, Ukraine) in a story of two cities abandoned due to industrial disasters.

In April 2015, Picher was featured in a segment on the National Geographic Channel called "The Watch", in which one of a handful of holdouts still resides and watches over what is left of the town.

All content from Kiddle encyclopedia articles (including the article images and facts) can be freely used under Attribution-ShareAlike license, unless stated otherwise. Cite this article:
Picher, Oklahoma Facts for Kids. Kiddle Encyclopedia.