Quapaw is a town in Ottawa County, Oklahoma, United States. The population was 906 at the 2010 census, a 7.9 percent decline from the figure of 984 recorded in 2000. Quapaw is part of the Joplin, Missouri metropolitan area. 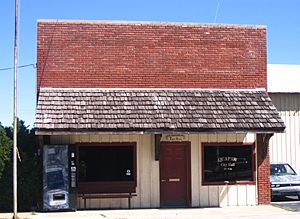 In 1891 Kansas farmer Isaac Bingham moved his family south into Ottawa County. The family established a community and opened several businesses. Quapaw Chief John Quapaw donated land for a community school. The Kansas City, Fort Scott and Memphis Railroad established a railroad stop and siding at the community location. This established access to markets for hay and agricultural products of the area. A post office was opened in the community grocery store in 1897.

The community leaders platted "New Town Quapaw," on land to the east purchased from native Harry Whitebird. This "new" town was incorporated in 1917 as Quapaw. Discovery of lead and zinc ores in the area resulted in this area being part of the Tri-State mining district, and resulted in a population boom as thousands of miners moved into the larger area. Native Americans were generally excluded from mining, although the county had a significant proportion from several federally recognized tribes. With the population and economic boom, new businesses were developed. The 1920 census listed 1,394 residents. In the 1920s U. S. Route 66 was developed through Quapaw and was paved through Ottawa County by 1933. This event was celebrated with Quapaw Chief Victor Griffin laying a zinc tablet in the center of Main Street.

Quapaw began to lose residents as the local mining operations began to decline. The population declined to 1,054 by 1940 and as mining activity in the area declined, the population dropped to 850 in 1960.

According to the United States Census Bureau, the town has a total area of 0.6 square miles (1.6 km2), all land. Quapaw is 9 miles (14 km) north of Miami, Oklahoma and is the last town in Oklahoma on U.S. Highway 69A before the Kansas state line.

There were 352 households, out of which 31.5% had children under the age of 18 living with them, 52.8% were married couples living together, 14.2% had a female householder with no husband present, and 26.7% were non-families. 22.4% of all households were made up of individuals, and 11.6% had someone living alone who was 65 years of age or older. The average household size was 2.72 and the average family size was 3.16.

Quapaw was mentioned in a 1976 episode of the television show, M*A*S*H, a U.S. situation comedy. In the episode "The Colonel's Horse," when Colonel Potter goes to Tokyo on R&R, his horse develops colic. Mike Farrell's character B.J. said his wife Peg (played by Catherine Bergstrom) was from Quapaw and that his father-in-law knew all about horses; they called him for advice. Ironically, fellow M*A*S*H cast member Judy Farrell, Mike Farrell's real-life wife at the time, was born in Quapaw.

Quapaw is mentioned in the film Oklahoma, as one of the towns in which the character Jud had worked at some point in the past. Jud recounted a fictional case of deadly arson that occurred five years prior to the film's setting.

All content from Kiddle encyclopedia articles (including the article images and facts) can be freely used under Attribution-ShareAlike license, unless stated otherwise. Cite this article:
Quapaw, Oklahoma Facts for Kids. Kiddle Encyclopedia.