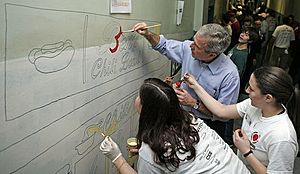 Cardozo is operated by District of Columbia Public Schools. The school is named after clergyman, politician and educator Francis Lewis Cardozo.

The Advanced Grammar School for Boys was established in 1877 and then combined with a similar school for girls in 1882 to form Washington High School, the first high school in the city. In 1890, the High School was split into three, with one high school opened in the current Peabody Elementary School building on Capitol Hill and another in Georgetown in the Curtis Building. As a result, the Washington High School became known as Central High School. In 1916, the school moved from Seventh and O to Thirteenth and Clifton.

Known locally as "the castle on the hill", Cardozo's iconic building was designed by architect William B. Ittner, a nationally renowned school building architect. The building was dedicated February 15, 1917.

Cardozo Senior High School was established in 1928. Originally located at Rhode Island Avenue and Ninth Street NW, it relocated to the Central High School building in 1950 and renamed. Cardozo was assigned for "colored" students in the segregated system and became one of three black high schools in DC.

The U Street Metro station is partially named after this school, with "Cardozo" in the station's subtitle. Likewise, an alternative, Urban Renewal-era name for the Columbia Heights neighborhood is Upper Cardozo, and some of the public buildings in the area still bear this name.

During the 1970s and 1980s, Cardozo High School's marching band was one of the best in Washington, DC, and won several band competitions. Due to their enormous popularity, the band was invited to participate in the Rose Parade in 1981. 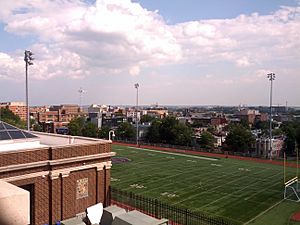 The view from Cardozo's parking deck: Florida Ave and Howard University to the southeast and U Street to the south.

In December 2011, work began to completely renovate Cardozo from the inside-out. Everything from exterior facade's crumbling masonry and shoddy window panes to the interior's dark, dingy hallways and outdated classroom spaces were replaced or restored to their original glory. Technology was added to classrooms, wood floors throughout the building were refinished, and the two courtyard spaces in the center of the school were turned into enclosed atrium spaces with the addition of glass skylights. The athletic facilities were improved and expanded as well, with a regulation-size gymnasium added onto the west side of the building. The swimming pool was also restored. In all, the renovation cost approximately $130 million and the school reopened for a new school year in August 2013. In addition to the physical changes to the building itself, the student body was increased with the addition of middle school students from the now-closed Shaw Middle School and the campus was renamed as Cardozo Education Campus.

All content from Kiddle encyclopedia articles (including the article images and facts) can be freely used under Attribution-ShareAlike license, unless stated otherwise. Cite this article:
Cardozo Education Campus Facts for Kids. Kiddle Encyclopedia.