The Caribbean martin or white-bellied martin (Progne dominicensis) is a large swallow.

It has at various times been considered alternatively as a race of the purple martin, Progne subis.

It breeds throughout the Caribbean, except on Cuba and Isla de la Juventud, where it is replaced by the related Cuban martin (P. cryptoleuca). It is closely related to the aformentioned species, as well as the Sinaloa martin (P. sinaloae) to which it used to be considered conspecific. There are sight records from mainland Central and South America, and most birds appear to migrate to the South American mainland. A single bird was recorded in Key West, Florida, on May 9, 1895 (AOU 2000). 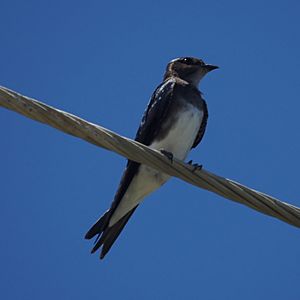 The Caribbean martin nests in cavities in banks and buildings, or old woodpecker holes. 3-6 eggs are laid in the lined nest, and incubated for 15 days, with another 26-27 to fledging. Just as the purple martin, this species may compete with other passerines for nesting cavities. In particular, the main foe is the house sparrow [1] in urban areas, where they mostly use man-made structures, whereas in more rural locations Picidae holes in coconut trees are favored, and there is less competition with the sparrows.

Caribbean martins are gregarious birds which hunt for insects in flight. Their call is a gurgly chew-chew. 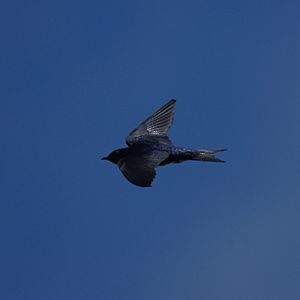 All content from Kiddle encyclopedia articles (including the article images and facts) can be freely used under Attribution-ShareAlike license, unless stated otherwise. Cite this article:
Caribbean martin Facts for Kids. Kiddle Encyclopedia.