Carl William Blegen (January 27, 1887 – August 24, 1971) was an American archaeologist who worked on the site of Pylos in Greece and Troy in modern-day Turkey. He directed the University of Cincinnati excavations of the mound of Hisarlik, the site of Troy, from 1932 to 1938.

Blegen was born in Minneapolis, Minnesota, the eldest of six children born to Anna Regine (1854–1925) and John H. Blegen (1851–1928), both of whom had emigrated from Lillehammer, Norway. His younger brother was noted historian Theodore C. Blegen. His father was a professor at Augsburg College in Minneapolis for more than 30 years and played a central role in the Norwegian Lutheran Church in America. Blegen earned his bachelor's degree from the University of Minnesota in 1904 and started graduate studies at Yale University in 1907. 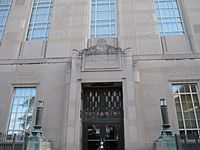 Blegen Library at the University of Cincinnati

In Greece, he was a fellow at the American School of Classical Studies at Athens (1911–1913), during which time he worked on excavations at Locris, Corinth and Korakou. During World War I Blegen was involved in relief work in Bulgaria and Macedonia, receiving the Saviors Order from Greece in 1919. Following the war he completed his Ph.D. at Yale (1920). He was then assistant director of the American School (1920–26); during his tenure he excavated at Zygouries, Phlius, Prosymna, and Hymettos. In 1927, Blegen joined the faculty of the University of Cincinnati. Blegen was professor of classical archaeology at the University of Cincinnati from 1927 to 1957. His excavations at Troy were carried out between 1932 and 1938, followed by those at the Palace of Nestor in Pylos, Greece in 1939 (the dig resumed 1952–1966). Many of the finds from this excavation are housed in the Archaeological Museum of Chora. Blegen retired in 1957.

The Carl Blegen Library is located on the campus of the University of Cincinnati. The library has curated an exhibit called Discovering Carl Blegen which includes images from Blegen's major campaigns in Troy and Pylos as well as his work and life at UC and abroad. Blegen Library at the American School of Classical Studies at Athens is named also after Carl Blegen. Blegen Hall on the University of Minnesota Twin City Campus is named after his brother Theodore C. Blegen.

Asked how to pronounce his name, Blegen told The Literary Digest: "Seeking the pagan is Doctor Blegen (blay'gen).

In 1923, Blegen proposed marriage to Elizabeth Denny Pierce (1888–1966), whom he had met in the American School of Classical Studies in Athens; Pierce initially accepted but then broke off the engagement as she did not wish to end her long-term relationship with Ida Thallon. A plan was formed by Blegen, Pierce, and Bert Hodge Hill (who appears to have had unreciprocated romantic feelings for Blegen) that Hodge Hill and Thallon would marry at the same time as Pierce and Blegen, and the four would live together; Thallon agreed on condition that she and Pierce would continue to travel and spend time together away from their husbands, and the two couples married and moved in together in Athens in 1924, in a relationship which they referred to as "the Family", "the quartet", and "the Pro Par" (short for "Professional Partnership"). 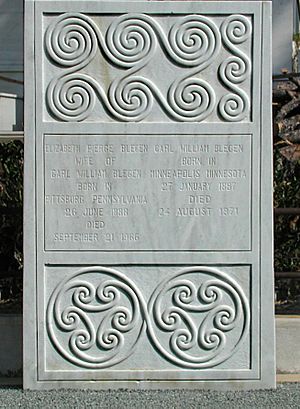 Carl Blegen died in Athens, Greece on 24 August 1971 at the age of 84. He is buried in the Protestant corner of the First Cemetery of Athens, together with Elizabeth Pierce Blegen. The graves of Ida Thallon and Bert Hodge Hill are also located in the corner. Carl W. Blegen bequeathed a large collection of his documents to the American School of Classical Studies at Athens.

All content from Kiddle encyclopedia articles (including the article images and facts) can be freely used under Attribution-ShareAlike license, unless stated otherwise. Cite this article:
Carl Blegen Facts for Kids. Kiddle Encyclopedia.