The Carnegie Library of Homestead is a public library founded by Andrew Carnegie in 1898.

It is one of 2,509 Carnegie libraries worldwide; 1,689 built in the United States. It was the sixth library commissioned by Carnegie in the U.S. and the seventh to open. Completed in November 1898, it is the third oldest Carnegie library in continuous operation in its original structure in the U.S. after the Main Branch and Lawrenceville Branch of Pittsburgh. The library is an independent entity; it is not a "branch" of the Carnegie Library of Pittsburgh, which operates one main facility and 19 branches within the city of Pittsburgh.

The building houses a library with a collection of over 34,000, the 1,047-seat "Carnegie Library Music Hall" and an athletic club with a heated indoor pool.

The library was constructed on a hill in Homestead, Pennsylvania (now Munhall) overlooking the Homestead Steel Works, the site of an 1892 labor strike where Pinkerton agents fought with union workers, resulting in 16 deaths.

A library had been under consideration for several years before the strike, but unlike those at Carnegie's Homestead plant, laborers at the Edgar Thomson Works in Braddock had capitulated to his wage concession demands in 1887; the Carnegie Free Library of Braddock was founded the following year. "Our works at Homestead are not to us as our works at Edgar Thomson. Our men there are not partners," Carnegie said.

Groundbreaking for the $300,000 project took place in April 1896. The French Renaissance design was the work of Pittsburgh architects Frank Alden and Alfred Harlow. Contractor William Miller and Sons used Pompeian brick for construction of the 220 by 132 foot facility.

Renovations and modifications have not altered the original physical arrangement of the building, that of three separate facilities- library, music hall and athletic club- under one roof.

While Carnegie required communities to use public funds to subsidize the operation of his libraries, Homestead was one of the few exceptions. Operation of the libraries in Braddock, Homestead and Duquesne were originally funded by Carnegie's plants in those towns. After the sale of his business to U.S. Steel in 1901, Carnegie established a $1 million trust to support the three facilities. In the 1960s, the Braddock and Duquesne libraries were turned over to the school districts in those communities by the Board of the Endowment for the Monongahela Valley. The Homestead library is now the sole beneficiary of Carnegie's gift. 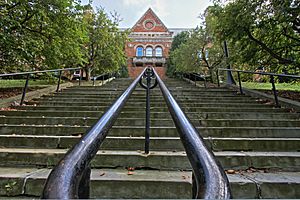 Main Entrance Staircase of the Library

USX Corporation, the successor to U.S. Steel, continued to provide major support until 1988, when the corporation terminated its regular donations and the Borough of Munhall assumed responsibility for the library. Despite the closing of the Homestead Steel Works two years earlier and the precipitous decline in employment and tax revenue, the library remained open and operational with grants secured by community volunteers and the investment income from Carnegie's endowment. When the financial crash of 2008 reduced the value of the endowment by $300,000, the library board furloughed its executive employees and assumed management responsibilities rather than cut services. Fundraising efforts, revenue from athletic club memberships, music hall rentals, and concession sales have maintained the library's viability.

In the early 20th century, the Homestead Library & Athletic Club football team, composed of many former star Ivy League players, was considered one of the top semi-professional teams in the country. Hall of Famer Rube Waddell played for the Club's baseball team. The amateur teams at the library also won national championships in wrestling and track & field.

The building has rightfully in the center as the focus 'The Library'-- Music Hall upon the right and the Working Man's Club upon the left. These three foundations from which healing waters are to flow for the Instruction, Entertainment and Happiness of the people. Recreation of the working man has an important bearing upon his character and development as his hours of work.
—Andrew Carnegie on the Homestead Library

All content from Kiddle encyclopedia articles (including the article images and facts) can be freely used under Attribution-ShareAlike license, unless stated otherwise. Cite this article:
Carnegie Library of Homestead Facts for Kids. Kiddle Encyclopedia.