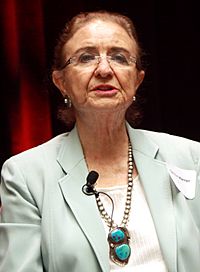 Carolyn Rexroat Warner (August 2, 1930 – October 9, 2018) was an American Democratic politician. She was born in Ardmore, Oklahoma.

Warner was the 15th Superintendent of Public Instruction for the state of Arizona from 1975 to 1987. Warner was the Democratic nominee for Governor of Arizona in 1986, but lost to then-State Senator Evan Mecham.

Warner also ran for the United States Senate in 1976, but lost the primary, and was elected Democratic National Committeewoman for Arizona in 2004 and 2008.

All content from Kiddle encyclopedia articles (including the article images and facts) can be freely used under Attribution-ShareAlike license, unless stated otherwise. Cite this article:
Carolyn Warner Facts for Kids. Kiddle Encyclopedia.