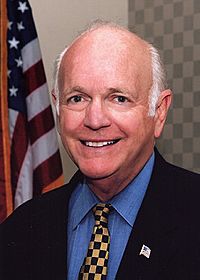 Dennis Webster DeConcini (born May 8, 1937) is an American lawyer, philanthropist, politician. He served as the Democratic U.S. Senator from Arizona from 1977 until his retirement in 1995. He was replaced by Jon Kyl. DeConcini was born in Tucson, Arizona.

In February 1995 DeConcini was appointed by President Bill Clinton to the Board of Directors of the Federal Home Loan Mortgage Corporation (Freddie Mac), where he served until May 1999.

All content from Kiddle encyclopedia articles (including the article images and facts) can be freely used under Attribution-ShareAlike license, unless stated otherwise. Cite this article:
Dennis DeConcini Facts for Kids. Kiddle Encyclopedia.