Carrathool is a village in the western Riverina region of New South Wales, Australia, in Carrathool Shire. In 2011 census, Carrathool had a population of 296 people. It is about 5 kilometres (3 mi) north of the Sturt Highway between Darlington Point and Hay (on the opposite side of the Murrumbidgee River to the highway). The village is situated on the plain a few kilometres north of the river, clustered around the now-disused railway station.

In October 1852 a reserve of 4 1⁄2 square miles (12 km2) was proclaimed (No. 13 in the Lachlan Pastoral District); it was situated at the location known as Currathool on the north bank of the Murrumbidgee River "on a cattle run occupied by Mr. Rudd".

The location of the original village of Carrathool — or ‘Currathool’ as it was often written — was at a river-crossing on the Murrumbidgee River at a place called Boree Point.

Carrathool Post Office opened on 20 June 1882. Carrathool notably is sign posted on its outskirts "population 99" and for many years we hoped to reach 100, however with droughts and children often moving to larger centres this figure may never have been reached. The above census figures for 2006 would not relate to the township of carrathool and would not have a higher population than its neighbouring township of Goolgowi. 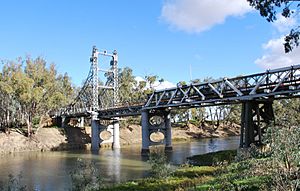 The bridge over the Murrumbidgee River, south of Carrathool

The bridge spanning the Murrumbidgee River between Carrathool and the Sturt Highway was completed in 1924. It is an Allan-type timber truss road bridge, and has a bascule-type lift span supported on cylindrical iron piers, designed to allow river-craft to pass. Only three bascule lift span bridges remain in NSW, and the Carrathool bridge is the only one of these in a timber truss road bridge. Percy Allan, the designer of Allan truss and other bridges, was a senior engineer in the NSW Public Works Department.

The Carrathool bridge was constructed in response to public pressure for a bridge to replace the river punt. Funding for work was drawn partly from the local community, and partly from the Department of Public Works. The requirement that local residents pay for half the cost of the bridge "was deplored by the then Mayor of Hay, who was a vocal advocate for the rights and the development of the Riverina region".

The Carrathool bridge is considered to be of high heritage value; it is listed on the register of the National Trust of Australia and the NSW State Heritage Register.

All content from Kiddle encyclopedia articles (including the article images and facts) can be freely used under Attribution-ShareAlike license, unless stated otherwise. Cite this article:
Carrathool Facts for Kids. Kiddle Encyclopedia.