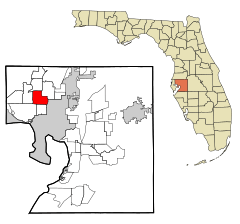 Carrollwood was founded in 1959 and was built out in the 1960s. The community spread westward during the 1970s and 1980s. Carrollwood was struck by a tornado outbreak, which occurred throughout Central Florida on April 4, 1966.

Carrollwood boundaries include Lake Magdalene to the north, Tampa to the east, Egypt Lake to the south, and Carrollwood Village to the west.

Some of the major roads serving the community are Dale Mabry Highway, Busch Boulevard, Bearss Avenue and Fletcher Avenue.

All content from Kiddle encyclopedia articles (including the article images and facts) can be freely used under Attribution-ShareAlike license, unless stated otherwise. Cite this article:
Carrollwood, Florida Facts for Kids. Kiddle Encyclopedia.