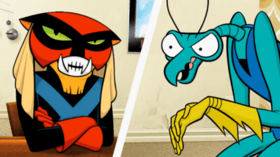 Cartoon Planet is a short lived spin-off of the Adult Swim program Space Ghost Coast to Coast. The show has random skits and songs with the characters Space Ghost, Zorak, and Brak. Zorak and Brak are comic foils for Space Ghost. Moltar, a main character on Coast to Coast, does not appear on the show. In the credits everyone is credited by their first name only. The show has not been released on DVD, because of rights issues other than some segments being extras on The Brak Show Volume One.

In 2012, the show has been revived but only Brak and Zorak host the show and the programming is Cartoon Network Original shows such as Ed, Edd n Eddy, Dexter's Laboratory, The Powerpuff Girls, and others.

All content from Kiddle encyclopedia articles (including the article images and facts) can be freely used under Attribution-ShareAlike license, unless stated otherwise. Cite this article:
Cartoon Planet Facts for Kids. Kiddle Encyclopedia.