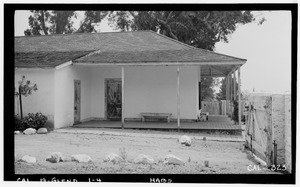 Casa Adobe de San Rafael is one of the oldest homes in Glendale, California. The home has been in continuous use since its founding in 1865. It was designated a California Historic Landmark (No. 235) on Oct. 31, 1935.

Jose Maria Verdugo petitioned Pedro Fages, Governor of Alta California, for a Spanish land grant in October in 1784. When granted it was the first of the Rancho grants and one of the largest grants. The grant called Rancho San Rafael was a 36,403-acre (147.32 km2) in the San Rafael Hills, bordering the Los Angeles River and the Arroyo Seco in present-day Los Angeles County, southern California.

When parts of Rancho San Rafael were sold, Tomas Avila Sanchez, Sheriff of Los Angeles County, purchased a tract of 100 acres and in 1865 built this artistic adobe home of the hacienda type. In 1867, Sanchez married Maria Sepulveda (daughter of Fernando Sepulveda and Maria Josefa Dominguez). Maria's stepfather gave her 100 acres (40 ha) of land and she and Tomas built Casa Adobe de San Rafael which is situated approximately a half-mile from the original Verdugo Adobe. The site of the original Verdugo Adobe is now the Hoover High School. A line of trees bordered the road that separated the two adobe sites. Tomas lived in Casa Adobe de San Rafael until his death in 1882. Maria and her family lived at the Casa Adobe for a few years after Tomas death. Maria sold the Casa and here land, 100 acres, to Andrew Glassell for $12,000. Maria and her family moved to Los Angeles.

A Fiesta de las Luminarias (Festival of Lights) and Christmas Open House is held during the month of December.

All content from Kiddle encyclopedia articles (including the article images and facts) can be freely used under Attribution-ShareAlike license, unless stated otherwise. Cite this article:
Casa Adobe de San Rafael Facts for Kids. Kiddle Encyclopedia.