Casa Loma Ballroom is a historic dance hall in St. Louis, Missouri. It is located at 3354 Iowa Avenue in the city's Gravois Park neighborhood. 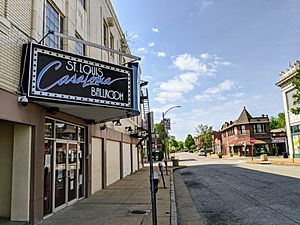 The Cinderella Recreation Hall and Dance Academy was built in 1927 and later renamed the Showboat Ballroom. When Art Kawell and H. J. "Nap" Burian purchased it in 1935, it was again renamed; its new name, Casa Loma Ballroom, has remained.

As its prices were lower than those of the other dance halls in St. Louis, it was known as a "working-class" ballroom.

Casa Loma burned on the evening of January 19, 1940. It reopened later that year with a major improvement: a 5,000 square foot "floating" dance floor consisting of maple on top of an inch of rubber. It has 18,000 square feet and a balcony that overlooks the dance floor. 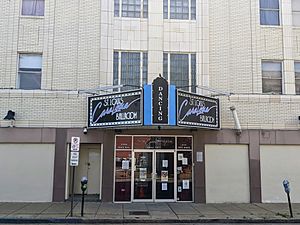 The ballroom, long the only one remaining in St. Louis, has been owned by Patrick and Roseann Brannon since the early 1990s. It hosts performances of swing, big band, jazz, and rock and roll music. Lessons in ballroom, waltz, fox trot, tango, Latin and swing dancing often take place before the live music begins. It also serves as a private and public events venue.

All content from Kiddle encyclopedia articles (including the article images and facts) can be freely used under Attribution-ShareAlike license, unless stated otherwise. Cite this article:
Casa Loma Ballroom Facts for Kids. Kiddle Encyclopedia.