The Cass Sculpture Foundation is a charitable commissioning body based in Goodwood, Sussex, England. The Foundation's 26 acre grounds are home to an ever-changing display of 80 monumental sculptures, all of which are available for sale with the proceeds going directly to artists. The Foundation is open to the public 7 days a week from 10.30 am to 4.30 pm, from March until November. The Foundation is a self-sufficient body reliant on sales of commissioned sculpture and visitor entrance fees. 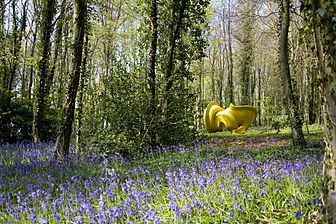 Declination (2005) by Tony Cragg in the grounds of Cass Sculpture Foundation.

Inspired by their own extensive collection of works from artists such as Elizabeth Frink and Henry Moore, Wilfred and Jeannette Cass embarked on their own journey to establish a revolutionary new model for a sculpture foundation. After initial years of research and visits to other sculpture parks such as the Kröller-Müller in the Netherlands, Louisiana in Denmark and Hakone in Japan the Cass Sculpture Foundation was fully established in 1992.

To date the Foundation has commissioned over 400 important works from both emerging and established artists. Previous commissions include works by Anthony Caro, Tony Cragg, Andy Goldsworthy, Marc Quinn, Kiki Smith, and Rachel Whiteread. The ambition is that the new commissions will act as a catalyst for sculptors, sending them in new directions and creating opportunities elsewhere.

The Foundation marked its twenty-year anniversary in 2012 with the London exhibition, 'Tony Cragg at Exhibition Road'. Coinciding with the Cultural Olympiad, this exhibition displayed 12 works from the British artist, Tony Cragg along Exhibition Road and its accompanying cultural institutions including the V & A, Science and Natural History Museum. 2012 also saw the Foundation launch a number of new international partnerships including the State Hermitage Museum in Russia, The Creative India Foundation in Hyderabad, India and the Yellow River Arts Centre in Yinchuan, China.

CASS is an authority on the commissioning and exhibiting of large-scale sculpture. The organisation's charitable objectives are met through the sale of its sculptures. Once a work has been sold CASS splits the profit between the artist and the next commission thereby ensuring that it maintains a rolling collection of new works.

The commissioning process can take between 1 and 5 years from conception to completion. During the process the artists contribute a maquette and works on paper to the Foundation's archive for educational purposes

Through meeting fabrication costs, and other additional costs (including installation and marketing), the Foundation funds artists to work on a very large scale making works several meters high. The Foundation encourages pioneering and experimental works that challenge the creative processes of each artist in order to further their careers.

The grounds are open seasonally, from March to November. There is free parking on site and disabled access, plus a gift shop and picnic area.

All content from Kiddle encyclopedia articles (including the article images and facts) can be freely used under Attribution-ShareAlike license, unless stated otherwise. Cite this article:
Cass Sculpture Foundation Facts for Kids. Kiddle Encyclopedia.