Castanea pumila, commonly known as the Allegheny chinquapin, American chinquapin (from the Powhatan) or dwarf chestnut, is a species of chestnut native to the southeastern United States. The native range is from Maryland and extreme southern New Jersey and southeast Pennsylvania south to central Florida, west to eastern Texas, and north to southern Missouri and Kentucky. The plant's habitat is dry sandy and rocky uplands and ridges mixed with oak and hickory to 1000 m elevation. It grows best on well-drained soils in full sun or partial shade.

It is a spreading shrub or small tree, reaching 2–8 m (6 ft 7 in–26 ft 3 in) in height at maturity. The bark is red- or gray-brown and slightly furrowed into scaly plates. The leaves are simple, narrowly elliptical or lanceolate, yellow-green above and paler and finely hairy on the underside. Each leaf is 7.5–15 cm (3.0–5.9 in) long by 3–5 cm (1.2–2.0 in) wide with parallel side veins ending in short pointed teeth. The flowers are monoecious and appear in early summer. Male flowers are small and pale yellow to white, borne on erect catkins 10–15 cm (4–6 in) long attached to the base of each leaf. Female flowers are 3 mm (0.12 in) long and are located at the base of some catkins. The fruit is a golden-colored cupule 2–3 cm (0.79–1.18 in) in diameter with many sharp spines, maturing in autumn. Each cupule contains one ovoid shiny dark brown nut that is edible.

A natural hybrid of Castanea pumila and Castanea dentata has been named Castanea × neglecta. 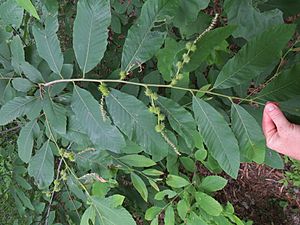 John Smith of Jamestown made the first record of the tree and its nuts in 1612, observing its use by the Native Americans. Native Americans made an infusion of chinquapin leaves to relieve headaches and fevers. The bark, leaves, wood, and seed husks of the plant contain tannin. The nuts can be blanched, dried, and rehydrated to be prepared as food. The wood is hard and durable and is sometimes used in fences and fuel, but the plant is too small for the wood to be of commercial importance.

Chinquapins are used in landscapes for the purpose of attracting wildlife. When the base of plant is cut or wounded at ground level the plant will grow multiple stalks producing a thick cover used by turkeys. The nuts are consumed by squirrels and rabbits while white tail deer graze upon the foliage.

All content from Kiddle encyclopedia articles (including the article images and facts) can be freely used under Attribution-ShareAlike license, unless stated otherwise. Cite this article:
Castanea pumila Facts for Kids. Kiddle Encyclopedia.