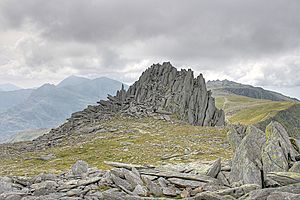 Castell y Gwynt is a top of Glyder Fach in Snowdonia, north-west Wales. It has the merit of being the only 3000 ft Welsh summit classed as only a Nuttall, hence it is not included in the Welsh 3000s. It has a prominence of 15.7 m (51.5 ft), and was only included on the Nuttall's list after re-surveying in 2007. The top is more famous as a feature than a summit.

All content from Kiddle encyclopedia articles (including the article images and facts) can be freely used under Attribution-ShareAlike license, unless stated otherwise. Cite this article:
Castell y Gwynt Facts for Kids. Kiddle Encyclopedia.