The Catalina affair (Swedish: Catalinaaffären) was a military confrontation and Cold War-era diplomatic crisis in June 1952, in which Soviet fighter jets shot down two Swedish aircraft over international waters in the Baltic Sea.

The first aircraft to be shot down was a Swedish Air Force Tp 79 spy plane, a derivative of the Douglas DC-3, carrying out radio and radar signals intelligence-gathering for the National Defence Radio Establishment. None of the crew of eight were rescued.

The second aircraft to be shot down was a Swedish Air Force Tp 47, a Catalina flying boat, involved in the search and rescue operation for the missing DC-3. The Catalina's crew of five were saved.

The Soviet Union publicly denied involvement until its dissolution in 1991. Both aircraft were located in 2003, and the DC-3 was salvaged.

The first aircraft involved was a Swedish Air Force Douglas DC-3A-360 Skytrain, a military transport derivative of the DC-3 known in Swedish service as Tp 79. It carried the serial number 79001. In the media coverage following the event, it became known simply as "the DC-3."

The aircraft was manufactured in 1943 with original US serial number 42-5694, and was delivered to USAAF 15th Troop Carrier Squadron (61st Troop Carrier Group). It saw action in northern Africa before being stationed at RAF Barkston Heath. It was flown on February 5, 1946, from Orly Air Base via Hanau Army Airfield to Bromma and was registered as SE-APZ on May 18, 1946 as a civil aircraft to Skandinaviska Aero AB.

On June 13, 1952, it disappeared east of the isle of Gotska Sandön while carrying out signals intelligence-gathering operations for the Swedish National Defence Radio Establishment (FRA). The aircraft was lost with its entire crew of eight in the incident. Three of the eight crew members were military personnel from the Swedish Air Force, and the other five were civilian signals intelligence (SIGINT) operators from the National Defence Radio Establishment:

Three days after the initial incident, on June 16, 1952, two Consolidated PBY-5 Catalina flying boats, known in Swedish service as Tp 47, searched for the DC-3 north of Estonia. One of the aircraft, carrying airframe serial no. 47002, was shot down by Soviet aircraft, but the crew of five ditched near the West German freighter Münsterland and were rescued. 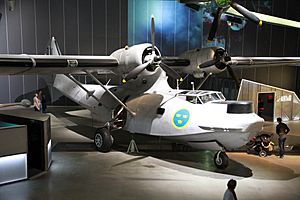 The Soviet Union denied shooting down the DC-3, but a few days later a life raft with Soviet shell shrapnel was found. In 1956, while meeting the Swedish Prime Minister Tage Erlander, the Soviet leader Nikita Khrushchev admitted that the Soviet Union had shot down the DC-3. This information was not released to the public at the time.

Sweden maintained for nearly 40 years that the plane was undertaking a navigation training flight. Only after pressure from crewmembers' families did Swedish authorities confirm that the DC-3 was equipped with British equipment and had been spying for NATO. 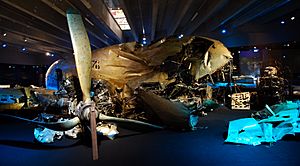 Bullet holes on 79001 showed that the DC-3 was shot down by a MiG-15bis fighter. The exact splashdown time was also determined, as one of the clocks in the cockpit had stopped at 11:28:40 CET. To this date the remains of four of the eight-man crew have been found and positively identified.

All content from Kiddle encyclopedia articles (including the article images and facts) can be freely used under Attribution-ShareAlike license, unless stated otherwise. Cite this article:
Catalina affair Facts for Kids. Kiddle Encyclopedia.