Influenced by the French-born Archbishop Lamy and in dramatic contrast to the surrounding adobe structures, Saint Francis Cathedral was designed in the Romanesque Revival style. As such, the cathedral features characteristic round arches separated by Corinthian columns and truncated square towers. The large rose window in front and those of the Twelve Apostles in the lateral nave windows were imported from Clermont-Ferrand in France. The towers were originally planned to be topped with dramatic 160-foot (49 m) steeples, but due to lack of funds, these were never built. The north tower is a single row of bricks taller than the south tower. The cathedral was built from yellow limestone blocks quarried near the present site of Lamy. A 2005 addition to the upper façade of the cathedral is a small, round window featuring a dove, the symbol of the Holy Spirit. It is a stained glass replica of the translucent alabaster window designed in the 17th century by the Italian artist Bernini for St. Peter's Basilica in Vatican City. 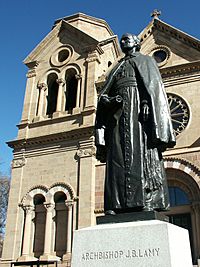 Statue of Lamy in front of the cathedral

This statue of St. Francis, the patron saint of the diocese, was installed at the Cathedral during the 1967 renovations.

Kateri Tekakwitha (1656–1680) is the first North American Indian to be beatified, and was canonized in October 2012. She was an Algonquian-Mohawk woman of New York State who converted to Christianity at an early age. The statue was created by Estella Loretto, a sculptor from the nearby Jemez Pueblo, and installed in August 2003. A plaque noting Kateri's canonization was added in October 2012.

A statue by Jeno Juszko honors Father Lamy (1814–1888), who was installed as the first bishop of the Diocese of Santa Fe in 1850. Under his direction, the cornerstone of the current cathedral was laid in 1869. He became archbishop in 1875, when the diocese was raised to an archdiocese. He retired in July 1885 to his residence north of town, known as Bishop's Lodge. He is buried in the crypt beneath the cathedral floor.

Stations of the Cross Prayer Garden

Fourteen life-size sculptures by Gib Singleton represent stages during the events in the hours leading up to Jesus' crucifixion as developed by St. Francis of Assisi. The Prayer Garden is sited in the remnant of Bishop Lamy's once-extensive gardens on the cathedral grounds.

The keystone in the arch above the main entrance contains a triangle with the Tetragrammaton in Hebrew carved in it. An "old story" suggests that this was Fr. Lamy's way of thanking various local Jewish merchants for their financial contributions towards the building of the cathedral. Although Jewish merchants in Santa Fe did help fund the building, there are other examples of the Catholic Church using Hebrew symbols outside of Santa Fe that cast doubt on this story's credibility. 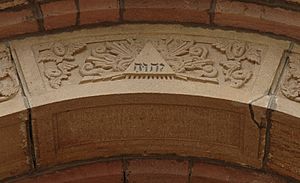 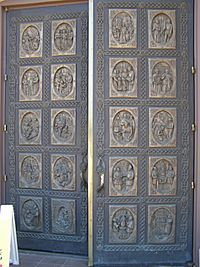 During the restoration of 1986, new doors were created, each with ten bronze panels that portray events in the history of the church in Santa Fe. Donna Quasthoff was the commissioned sculptor. 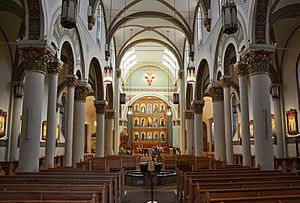 The baptismal font is in the center of the nave. Made of Brazilian granite, it was dedicated on June 3, 2001, by Most Rev. Michael J. Sheehan. The eight-sided form represents the 8th day, or Easter, marking God's New Creation through the resurrection of Jesus Christ. The basin is a cruciform, with three steps representative of the 3 days between Jesus' crucifixion and his resurrection. The rill symbolizes the four Evangelists, who cast their nets to catch men. Its location directly between the doors and the altar is representative of the faith journey. To the south is the Ambry Cabinet, containing the oils used in the sacraments. To the north is the Easter Candle stand.

Surrounding the nave along the walls are the Stations of the Cross. The original artwork was done in New Mexico Mission Style. The French archbishops gradually removed the art and painted the walls white. In 1997, the current archbishop began to have the interior restored as it was historically. The Stations are created in Santero style by Marie Romero Cash. Roberto Montoya, a Penitent, carved the Spanish-style frames. 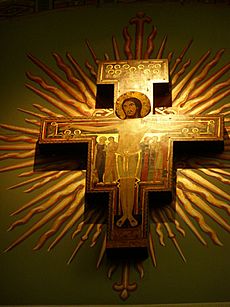 In 1626, Fray Alonso Benavides brought Our Lady of the Rosary to Santa Fe. The chapel was built at that time for the statue. During the Pueblo Revolt, the statue was removed, but returned in 1693 during the peaceful return of the Spanish settlers. She was renamed La Conquistadora in honor of what was believed to be her peaceful acceptance by the natives. Behind the statue is a reredos, a mural style from Spain, which depicts various saints. During a recent (2000–2009) restoration, an older painting was found. On the left are the coffins of two early Franciscan priests. The chapel is listed as a "contributing property" of the Santa Fe Historic District.

The chapel is reserved for prayer. The window wall along the south transept was added during the 1986 renovations. Etched into the glass are depictions of the Apostles and the Holy Family, by the artist Andrea Bacigalupa. The stained glass windows in the chapel were made in France and represent the Eucharist.

Located in the east end of the nave is the sanctuary. Above the altar is the San Damiano Crucifix, a replica of the crucifix in Assisi, Italy. Tradition says that the Lord leaned down from the crucifix and said; "Francis, go and repair my house." 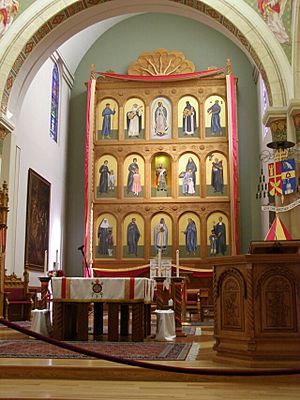 Reredos with St. Francis surrounded by saints of the New World.

The altar screen, a reredos, was created for the 100th anniversary of the Cathedral in 1986. In the center is an 18th-century statue of St. Francis. He is surrounded by painted images of saints of the New World.

Directly behind the sanctuary is the entrance to the crypt. The sanctuary was redesigned in 1986 in accordance with changes in the liturgical worship. The Archbishop's chair is located to the north, next to a pillar.

All content from Kiddle encyclopedia articles (including the article images and facts) can be freely used under Attribution-ShareAlike license, unless stated otherwise. Cite this article:
Cathedral Basilica of St. Francis of Assisi (Santa Fe) Facts for Kids. Kiddle Encyclopedia.