Cathedral Caverns State Park is a publicly owned recreation area and natural history preserve located in Kennamer Cove, Alabama, approximately 5 miles (8.0 km) northeast of Grant and 7 miles (11 km) southeast of Woodville in Marshall County. The park's main feature, first known as Bats Cave, was developed as a tourist attraction in the 1950s. Cathedral Caverns was declared a National Natural Landmark in 1972 and opened as a state park in 2000.

Cathedral Caverns is a karst cave with a large stalagmite forest covering approximately 3 acres (1.2 ha). The public portion of the cave extends along 8-foot-wide (2.4 m) wheelchair-accessible, concrete walkways for approximately 3,500 feet (1,100 m) and has some 2 miles (3.2 km) of paths; another 2,700 feet (820 m) extend beyond the end of the pathway. Some 11,000 feet (3,400 m) have been surveyed and explored; only experienced cavers are allowed to go beyond the developed trail. The cave system laid claim to many world records in its commercial heyday though their accuracy has been disputed. 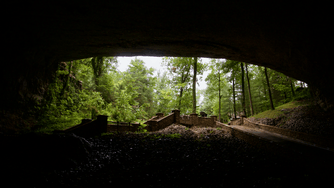 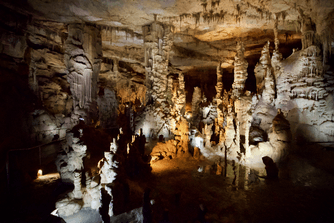 Notable features of the caverns include:

Archaeological excavations at the mouth of Cathedral Caverns have indicated occupation by Native Americans as recently as 200 years ago and perhaps as early as 7000 BCE.

The cave was maintained as a tourist attraction by Jacob "Jay" Gurley from 1955 to 1974. It was sold at auction in 1975 to Tom German, who in turn sold it to the State of Alabama in 1987. After funding delays, the state began restoration work in 1995. The cavern was re-opened to the public as Cathedral Caverns State Park in May 2000.

The park offers cave tours, gem mining, and facilities for picnicking. The park has improved and primitive campsites and a single backcountry camping site.

All content from Kiddle encyclopedia articles (including the article images and facts) can be freely used under Attribution-ShareAlike license, unless stated otherwise. Cite this article:
Cathedral Caverns State Park Facts for Kids. Kiddle Encyclopedia.