Cathedral of Mary Our Queen, Baltimore facts for kids

The Cathedral of Mary Our Queen is a cathedral of the Roman Catholic Church located at 5200 North Charles Street, in northern Baltimore, Maryland, USA. The structure, remarkable in size, was completed in 1959. 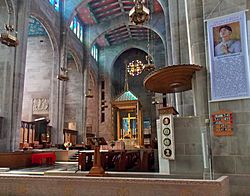 The cathedral is the seat of the Archbishop of Baltimore, succeeding the Basilica of the National Shrine of the Assumption of the Blessed Virgin Mary, on Cathedral Street at Mulberry Street, in downtown Baltimore. Because Baltimore is the Premier See of the United States and the downtown basilica was the nation's first Roman Catholic cathedral, it now serves as Co-cathedral of the archdiocese.

On March 20, 2012 Bishop William Lori of Bridgeport, Connecticut became 16th Archbishop of Baltimore, succeeding Archbishop (later Cardinal) Edwin F. O'Brien, who was named Grand Master of the Equestrian Order of the Holy Sepulchre of Jerusalem by Pope Benedict XVI. Monsignor Richard W. Woy is Rector. The cathedral is located in the Homeland area of northern Baltimore City and near Loyola University Maryland and St. Mary's Seminary and University, the first Catholic seminary in the United States. It was constructed using funds bequeathed by an Irish Baltimore merchant, Thomas J O'Neill. "It is the only cathedral in the 2,000 year history of the Church that was donated by a single individual"

"As befits any cathedral, this building has its legends, the following of which is Gospel truth. A midwestern stained-glass make was commissioned to provide windows honoring the fine arts for the stairway leading to the choir-loft. He elected to sketch an anonymous church to represent architecture, but was advised by the architect to depict some Baltimore church of his own choosing. To the Catholic Encyclopedia went the artist, where he found pictures of several local churches under the article on the Archdiocese of Baltimore. He picked the church which most appealed to him, sketched it, made the window, and sent the glass to the cathedral, where it was properly installed. Only later was it discovered that the artist had chosen Corpus Christi, the parish church of the donor, Thomas J O'Neill. Mr. O'Neill attended Mass in Corpus Christi , itself a gift church, on the day of his death in April, 1918." 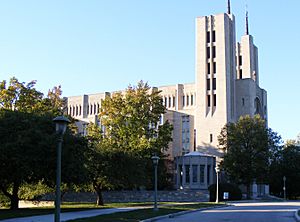 Cathedral of Mary Our Queen from the south

In October 1954, ground was broken for the new cathedral. On the morning of October 13, 1959, a few days past the fifth anniversary of the groundbreaking, Bishop Jerome Sebastian consecrated the cathedral. The design is modified Gothic with Art Deco accents, constructed of brick faced with limestone, and uses a classical east-facing cruciform floor plan. The cathedral measures 373 feet (114 m) long, 132 feet (40 m) wide and 163 feet (50 m) to the top of the two spires and can accommodate 2,000 people.

The crypt under the main floor of the cathedral is reserved for the remains of archbishops and auxiliary bishops of Baltimore. The list of bishops buried in the crypt:

A cellphone antenna is concealed within one tower, generating revenue for the congregation and diocese.

Pope John Paul II visited both the Cathedral of Mary Our Queen and the Basilica, as Pope in 1995 and in 1976 as Cardinal Karol Wojtyla. A plaque outside the Blessed Sacrament Chapel in the north transept commemorates the 1995 visit. 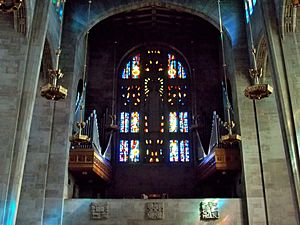 The rear gallery and some of the organ pipes

The cathedral has two organs. The original organs were Opus 9200 of the M. P. Moller Company of Hagerstown, Maryland. After 46 years of use and some considerable damage due to water and smoke the congregation decided to restore the cathedral organs in 2005. It chose Schantz Organ Co. of Ohio to restore and replace many parts of the original instruments. The restoration began with the removal of the Great Gallery organ and, after it was reinstalled and operable, work began on the Chancel organ.

The first solo concert performance on the restored organ occurred July 5, 2007 by Cherry Rhodes as part of the closing ceremonies of the American Guild of Organists regional convention held in Baltimore.

All content from Kiddle encyclopedia articles (including the article images and facts) can be freely used under Attribution-ShareAlike license, unless stated otherwise. Cite this article:
Cathedral of Mary Our Queen, Baltimore Facts for Kids. Kiddle Encyclopedia.