Cathedral of Saint Francis de Sales in Oakland was an 1893 church, which served as the cathedral of the Roman Catholic Diocese of Oakland in Oakland, California from 1962 until it was damaged in the 1989 Loma Prieta earthquake. 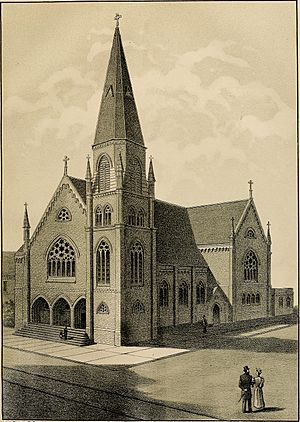 San Francisco Archbishop Joseph S. Alemany erected in Oakland, St. Mary's of the Immaculate Conception in 1853. As Oakland expanded, the archbishop founded in 1871, St. Anthony's in Brooklyn (East Oakland), 1876, Sacred Heart in Temescal (North Oakland) and 1879, St. Patrick's in West Oakland. As the population grew in central Oakland, the need arose for a parish between St. Mary's at 7th and Jefferson Streets and Sacred Heart at 40th and Grove Streets. 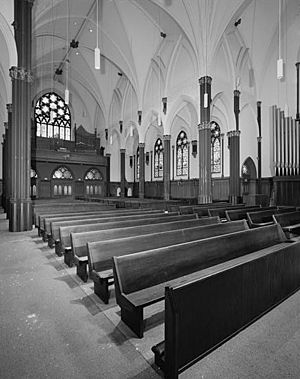 The nave looking toward the gallery.

Father Mc Sweeney had a predominantly Irish congregation. He sought about $15,000 to build a modest church. Mrs. Mary J. Canning (1830-1904) and her husband, James (1810-1892) would allow Mc Sweeney to build a grand church. Their first donation was $75,000. Mrs. Canning would donate $142,000 to build the church. Archbishop Riordan laid the cornerstone of the permanent church September 13, 1891. The structure was designed in a Norman Gothic Revival style, made of red brick, with a steeple and stained glass windows. The architecture, Charles Devlin's work on St. Francis de Sales, impressed Archbishop Riordan. Devlin was awarded the task to design St. Patrick's Seminary in Menlo Park, California. 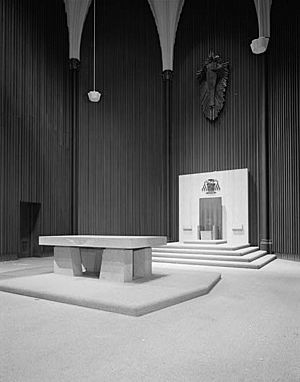 San Francisco Archbishop John J. Mitty, died October 15, 1961. Pope John XXIII established the Diocese of Oakland on January 13, 1962. February 21, 1962, Pope John named Floyd Lawrence Begin, the Auxiliary Bishop of Cleveland, Ohio, first Bishop of Oakland. Bishop Begin, asked at his installation, April 28, 1962 by the Apostolic Delegate to the United States, Egidio Vagnozzi, "when you build a cathedral," the new bishop replied, "I will pick an existing church, in Oakland" St. Francis de Sales Church was designated by Bishop Begin as the Diocese of Oakland's cathedral. After the changes of Vatican II, the structure underwent extensive renovations, which included painting the red brick white and removing the altar rail. In 1968, Msgr. O'Donnell became the first pastor of St. Francis de Sales Church to retire. He died, May 23, 1971.

The musical program at St. Francis de Sales achieved acclaim in the 1970s and 1980s. Local newspapers referred to the "Oakland Cathedral Sound," which earned a national reputation. Contributing to the musical program was a Schoenstein pipe organ, installed in 1982.

Bishop Floyd Begin died April 26, 1977, he was buried in a bishop's crypt at Holy Sepulchre Cemetery in Hayward, not the cathedral. Bishop John Cummins was installed at the Oakland Auditorium on June 30, 1977, not St. Francis de Sales Cathedral.

The cathedral suffered extensive damage October 17, 1989 in the Loma Prieta earthquake. One year later, Bishop Cummins announced that the structure would have to be torn down because the diocese could not afford the repairs, and in 1993 the cathedral was demolished. The estimated cost of repairing and performing seismic upgrades of both St. Frances de Sales and the Sacred Heart Church, also damaged in the earthquake, was $8 million.

A new cathedral, called Cathedral of Christ the Light, was built on another site at an estimated cost of $131 million. Christ the Light was consecrated and dedicated by Bishop Allen Vigneron on September 25, 2008.

All content from Kiddle encyclopedia articles (including the article images and facts) can be freely used under Attribution-ShareAlike license, unless stated otherwise. Cite this article:
Cathedral of Saint Francis de Sales (Oakland, California) Facts for Kids. Kiddle Encyclopedia.