Cathedral of Christ the Light (Oakland, California) facts for kids

The Cathedral of Christ the Light Complex, as a larger cathedral center, is composed of the cathedral church, the chancery office of the bishop's curia, a conference center, rectory (priests' residence), Order of Malta Northern California Health Clinic (which provides free diagnostic services to people without health insurance), and a mausoleum. The mausoleum features twelve crypts reserved for the bishops of Oakland and burial sites available to the members of the diocese for a comparable price to the other Catholic cemeteries in the diocese. The cathedral center also houses City Lights Cafe and the Cathedral Shop, as well as a public plaza and garden.

The Cathedral of Christ the Light was designed by architect Craig W. Hartman, of Skidmore, Owings & Merrill. chose Webcor Builders as the general contractor of cathedral construction.

Originally planned in 2000 under the direction of Bishop John Stephen Cummins On All Souls' Day November 2, the mausoleum was dedicated and the first Bishop of Oakland, Floyd Lawrence Begin, was reburied in one of its crypts.

Located at 2121 Harrison Street in Oakland, the cathedral serves as the mother church of approximately 530,000 Catholics 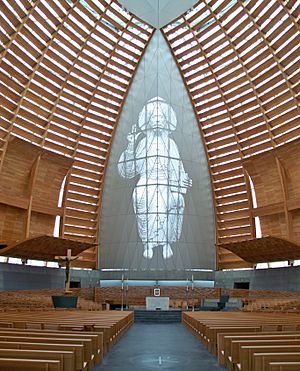 The Catholic Cathedral Corporation of the East Bay instituted a design competition for Christ the Light. Various designs were judged and the corporation announced Santiago Calatrava, of Valencia, Spain as the winner. He designed the post–September 11 World Trade Center Port Authority Trans-Hudson station in New York City. Calatrava's design for The Cathedral of Christ the Light was chosen before a site was appropriated for the project.

By the time a site was chosen, a parking lot formerly dedicated to the construction of the tallest building in Oakland, Calatrava's design fell out of favor and was instead replaced by a design of competition runner-up Craig W. Hartman of Skidmore, Owings & Merrill offices in San Francisco.

Hartman, designer of the international terminal at San Francisco International Airport, created a 20th-century abstract building from the family of styles developed by architects like Ludwig Mies van der Rohe, famous for creating steel shapes filled with glass. Hartman's vision for The Cathedral of Christ the Light was likened to the image of a bishop's mitre, 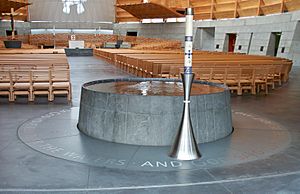 The worship space in The Cathedral of Christ the Light is a vesica piscis shape (translated into English means fish bladder), the shape formed by the intersection of two circles. The walls are composed of overlapping panels of wood and glass rising skyward to form the vault, much like the scales of a fish. The design is inspired by the miracle of the loaves and the fishes in Christian tradition, among other motifs. The Oakland Tribune wrote of the Hartman's description of light, "The design allows light to filter in, reminiscent of how light filters through a canopy of tall redwood trees in a wooded glade, Hartman said".

Like the Cathedral of Our Lady of the Angels which serves the Archdiocese of Los Angeles, The Cathedral of Christ the Light is built with protective measures against earthquake damage. 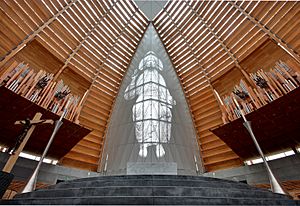 Organ on both sides of the altar

Orgues Létourneau Limitée Organ Opus 118 was installed on both side of the Vesica. It has got 92 ranks with 5298 pipes.

All content from Kiddle encyclopedia articles (including the article images and facts) can be freely used under Attribution-ShareAlike license, unless stated otherwise. Cite this article:
Cathedral of Christ the Light (Oakland, California) Facts for Kids. Kiddle Encyclopedia.