The Cathedral of Saint Peter is the mother church of the Roman Catholic Diocese of Belleville, located in Belleville, Illinois.

The cathedral parish of Saint Peter was founded in 1842 at a location east of the present structure, and named after Saint Barnabas the Apostle; it was rededicated to Saint Peter in 1847. By 1863, the congregation recognized the need for a larger structure. It constructed a brick church on the cathedral's present site which it dedicated in 1866.

In 1887, Pope Leo XIII created the Diocese of Belleville from the southern portion of the Diocese of Alton (now the Diocese of Springfield) and named Reverend John Janssen as the first bishop. Janssen chose St. Peter's as his cathedral. 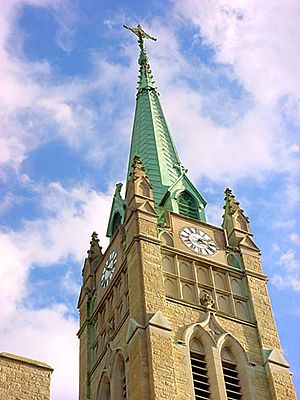 On January 4, 1912, around 6 p.m., neighborhood children noticed a fire in the upper portion of the building. Although they arrived quickly, firefighters were hampered in their efforts to extinguish the blaze by a lack of water pressure to reach the 80 ft (24 m) roof and the bitter 15 °F (−9 °C) temperatures. Water company officials blamed the poor water pressure on a broken valve at the water station. Soon, the fire burned through the roof timbers, which fell and ignited other parts of the structure. When the fire was extinguished, all that remained were the exterior walls and bell tower. One local newspaper estimated the damage at US$100,000 and said that insurance would cover only $40,000 of the repairs.

The present structure's Gothic architecture was modeled after that of the Cathedral of Exeter, England. It was designed by the architect Victor Klutho. The brick walls were covered with Winona split-face dolomitic limestone accented with Indiana limestone in 1956. The sanctuary was renovated in 1968, to conform to directives of the Second Vatican Council, and the south end of the cathedral expanded to increase capacity to 1,270. A mass in January 2012, marked the centennial of the fire and rebuilding, and also reinstallation of the pulpit and cathedra canopy which were removed during the 1968 work.

The cathedral houses a three-manual, 40-rank organ by the M. P. Moller Company that dates from 1968. A second console has been added along with four ranks of pipes.

All content from Kiddle encyclopedia articles (including the article images and facts) can be freely used under Attribution-ShareAlike license, unless stated otherwise. Cite this article:
Cathedral of Saint Peter (Belleville, Illinois) Facts for Kids. Kiddle Encyclopedia.