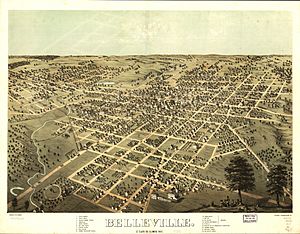 Belleville (French: Belle ville, meaning "Beautiful city") is a city and the county seat of St. Clair County, Illinois, coterminous with the now defunct Belleville Township. It is also the seat of the Roman Catholic Diocese of Belleville and the National Shrine of Our Lady of the Snows. The population was 44,478 according to the Census Bureau's 2010 data, making it the largest city in the state south of Springfield.

Belleville is the eighth-most populated city in the state outside the Chicago metropolitan area, and the most-populated city in southern Illinois and in the Metro-East region of the St. Louis Metropolitan Area. Due to its proximity to Scott Air Force Base, the population receives a boost from military and federal civilian personnel, defense contractors, and military retirees.

Belleville around the turn of the 20th century. 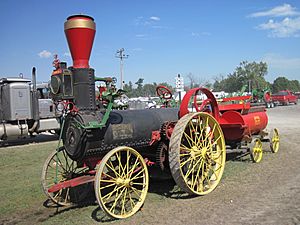 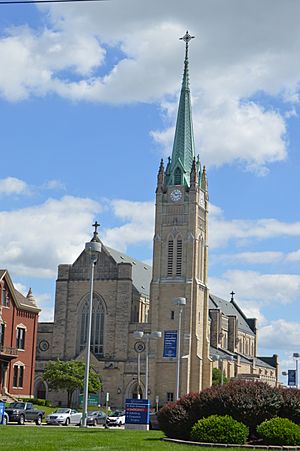 The city of Belleville was named by George Blair in 1814. Blair donated an acre of his land for the Town Square and an additional 25 acres (100,000 m2) adjoining the square for the new county seat, causing the county seat to be transferred from the village of Cahokia. Belleville was incorporated as a village in 1819, and became a city in 1850. It is said that Blair named the city Belleville (French for "beautiful city") because he believed that a French name would attract new residents. Since major immigration in the mid-19th century occurred following revolutions in Germany, most of the population is of German heritage.

Many of the educated people fled their homeland after the failure of the German Revolution in 1848. Belleville was the center of the first important German settlement in Illinois. By 1870, an estimated 90% of the city's population was either German born or of German descent.

After the Civil War, Belleville became a manufacturing center producing nails, printing presses, gray iron castings, agricultural equipment, and stoves. Belleville became known as "The Stove Capital of the World." The first brewery in Illinois was established in Belleville and in 1868, Gustav Goelitz founded the candy company that is known today as "Jelly Belly."

An immense deposit (400,000 acres (1,600 km2)) of bituminous coal was found in St. Clair County. By 1874, some farmers had become coal miners. One hundred shaft mines were in operation in and around Belleville. The coal brought the steam railroad to town, which allowed for the transport of many tons of coal to be shipped daily from Belleville to St. Louis. Later, Belleville would have the first electric trolley in the state.

The first style of homes in Belleville was simple brick cottages, known locally as "German street houses" or "row houses." However, there is a great variety of architectural style with American Foursquare, French Second Empire, Greek Revival, Gothic Revival, Italianate, Queen Anne, and Victorian. The Belleville Historic District, which was listed on the National Register of Historic Places in 1976, comprises 73 contributing properties. The "Old Belleville Historic District," was formed in 1974 and is the city’s first historic district. The city also had two more historic districts: "Hexenbukel" (est. in 1991) and "Oakland" (est. in 1995).

Belleville’s early German immigrants were scholarly, with most of them having graduated from German universities. They were nicknamed “Latin Farmers” because of this. After 1836 Gustav Koerner contributed to establish the city’s public library. The Belleville Public Library is the state’s oldest, predating the Illinois State Library by three years. The German settlers also founded choral and dramatic groups as well as literary societies. Belleville was also home to one of the first kindergartens in the country.

The National Civic League recognized Belleville as one of the ten 2011 recipients of the All-America City Award.

The Belleville Philharmonic Society was formed in 1866, making it the second oldest philharmonic orchestra in the country. With the increase in black population and migrants from the South, musicians developed who played blues and jazz; later rock clubs were added to the scene.

Belleville has three St. Louis MetroLink stations connecting it to St. Louis and the network via light rail: Memorial Hospital, Belleville, and College.

Illinois State Highways 15, 159, 177, 13 and 161 all pass through Belleville. Belleville is also adjacent to Interstate highways 64 and 255. I-64 is an east–west highway extending from Wentzville, Missouri to Virginia Beach, Virginia and is the major route from Belleville to downtown St. Louis. I-255 is part of a system of expressways that together form a loop around St. Louis.

Belleville has a bicycle trail that runs through the city from Southside Park to Southwestern Illinois College and Scott Air Force Base; it is mainly used for recreational purposes

Belleville is a sister city to Paderborn, Germany.

All content from Kiddle encyclopedia articles (including the article images and facts) can be freely used under Attribution-ShareAlike license, unless stated otherwise. Cite this article:
Belleville, Illinois Facts for Kids. Kiddle Encyclopedia.