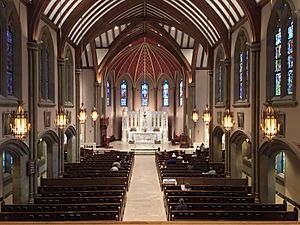 The interior of the cathedral

The old parish church traces its origin to the year 1902, when a group of Jesuit priests arrived in Shreveport to establish and staff a new parish and high school for boys. The parish's first rector was Fr. John F. O'Connor, S.J. By 1924, building a larger church was deemed necessary for the growing congregation. The cornerstone of the structure was laid on 31 July 1927. Construction was finished by June 1928, and the church was consecrated on 16 January 1929. The site of the first church was excavated in 2017 and the state of Louisiana placed a commemorative marker.

The church was designated a co-cathedral for the Diocese of Alexandria–Shreveport in 1977. That diocese was split, however, on 23 June 1986, creating the Diocese of Shreveport. St. John Berchmans became the cathedral church of the new diocese.

The Jesuits relinquished administration of the parish to the diocese in October 1988. Soon after, from 1992 to 1994, a major renovation was completed, which added both a vestibule and free-standing chapel with a seating capacity of 100 persons.

The school is now co-educational for grades Pre-K-8. One of its notable alumni is Don Hathaway, the sheriff of Caddo Parish from 1980 to 2000.

The cathedral was renovated in 2014; the High Altar and Tabernacle were restored and some elements installed in the 1992-1994 renovations were removed.

The cathedral was completed in a mixed Tudor-Gothic style: the exposed wooden beams inside the church are typical of the Tudor style, while the pointed arches of the windows and doorways evince a Gothic influence. Three of the large windows inside the church were executed by the stained-glass artist Emil Frei, Jr.

All content from Kiddle encyclopedia articles (including the article images and facts) can be freely used under Attribution-ShareAlike license, unless stated otherwise. Cite this article:
Cathedral of St. John Berchmans (Shreveport, Louisiana) Facts for Kids. Kiddle Encyclopedia.